Whatever Happend to Jeb Magruder? 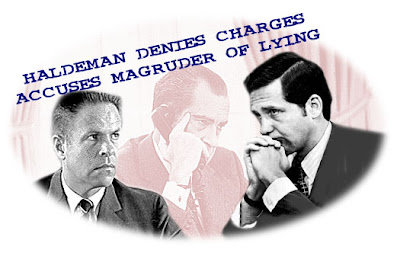 COLUMBUS, Ohio—Watergate figure Jeb Magruder, as he'll always be known—not as minister, consultant or civil servant, some of his other titles—is healing.

The 72-year-old is recovering from a stroke that apparently caused his car to hit a motorcycle and a truck on a Columbus expressway.

Magruder had been banged-up before in the more than three decades since his brief prison term for his role in the break-in that brought down Richard Nixon.

Still, friends say the past few years have been particularly tough.
"Things seem like they've been a spiral down for him," said Rev. Jim Long, a Columbus pastor who credits Magruder for helping him decide to enter the ministry several years ago.

Magruder was Nixon's deputy campaign director, an aide to Nixon's chief of staff, H.R. Haldeman, and deputy communications director at the White House. He spent seven months in prison for his role in covering up the 1972 break-in at Washington's Watergate complex.

Last week's accident came two years after he was stopped in rural Ohio and charged with drunken driving. He pleaded guilty to a reduced charge of reckless operation.

In 2003, police in suburban Grandview Heights arrested Magruder after finding him lying on a sidewalk and refusing to get up. Police said he appeared drunk. He pleaded no contest to a minor misdemeanor charge of disorderly conduct.

About two weeks before that arrest, Magruder had claimed he heard Nixon order the Watergate break-in. Historians consider that unlikely.

Long said Watergate was a black mark that Magruder knew he could never escape, but "it also gave him visibility—maybe notoriety would be another way to put it—that allowed him to do some things."

Magruder has not commented on his recent accident, in which he was cited with failure to maintain an assured clear distance and failure to stop after an accident or collision. A message on his home phone says he is not receiving calls and messages left by The Associated Press at his office were not returned.

Magruder became a born-again Christian after Watergate. He received a master's in divinity, served at a Presbyterian church in California, then became executive minister at First Community Church in Upper Arlington, a well-off Columbus suburb.

He spent eight years at First Presbyterian Church in Lexington, Ky., then went to work for Dallas-based RSI-Ketchum, a church fundraising consulting group. It was during that time he re-embraced his role in the country's most famous political scandal.

"There was a long time where he ran from that stuff, but it finally got to the point where he accepted it and the celebrity that went with it," said Jim Keith, the company's senior vice president.

In 2003, Magruder retired to Columbus, the city where 15 years earlier, Mayor Dana Rinehart had appointed him head of a city ethics commission and charged him to lead a yearlong honesty campaign. The city was reacting to free-for-all in which people scrambled to scoop up money that spilled from the back of an armored car.

An ethics commission "headed by none other than (are you ready America?) Jeb Stuart Magruder," quipped Time magazine.

Magruder took it stride, and pointed out, "it's a characteristic in American life that there is redemption." 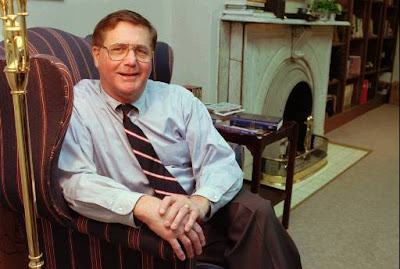 COLUMBUS - Jeb Stuart Magruder, an aide to President Nixon who spent seven months in prison for his role in covering up the 1972 break-in at Washington's Watergate complex, has been cited in two traffic crashes and with leaving the scene of an accident, police said Thursday.

Magruder's car rear-ended a motorcycle and struck the rear of a box truck Monday on state Route 315, according to police reports. Magruder sped away after the first crash with the motorcycle, witnesses told police.

Police cited Magruder, 72, of Columbus, with two counts of failure to maintain an assured clear distance and one count of failure to stop after an accident or collision. The charges are misdemeanors.

One witness said the car was traveling above 90 mph leaving the scene of the accident with the motorcycle, according to police reports. Another witness reported seeing Magruder's Audi speeding and making erratic lane changes before the first accident.

Magruder was in serious condition at Riverside Methodist Hospital after the crashes Monday. The hospital has declined to release any details since.

Magruder could not be reached for comment. A recorded message on his home phone said he was "not receiving calls at this time."

The drivers of the other two vehicles weren't seriously hurt.

Magruder, a retired Presbyterian minister, said for the first time in 2003 that he remembered listening in on the phone as Nixon gave the go-ahead for the plan to bug the Democratic headquarters at Watergate. Some historians reacted with skepticism.

Magruder was charged with drunken driving by the State Highway Patrol in 2005 in Fayette County, about 40 miles southwest of Columbus. That charge was later reduced to reckless operation, according to court records in Washington Court House.

In 2003, he pleaded guilty to disorderly conduct after police in the Columbus suburb of Grandview found him passed out on a sidewalk.