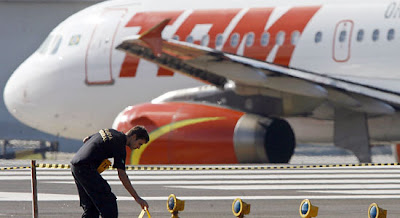 " ... Security video released by the air force showed TAM Flight 3054 speeding down the tarmac more than four times as fast as other planes landing around the same time ... [T]he thrust reverser, used by jets to slow down just after touching down, had been deactivated earlier in accordance with proper maintenance procedures. ... "

The AP quotes Brazilian aviation consultant Elias Gedeon: "it is possible that the thrust reverser could have played a role" in the crash.
http://news.yahoo.com/s/ap/brazil_plane_crash;_ylt=Athk02mGuStaIQPXe6h4umsZO7gF

Ask yourself, while viewing the CBS coverage of the TAM crash here, how permitting the airbus to land with a disabled reverse thruster could possibly be described as "proper" in this instance:
http://cbs5.com/topstories/topstories_story_200092017.html 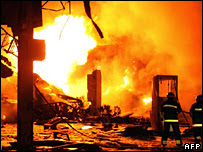 Officials are blaming the maintenance manual - because it doesn't specifically state that a plane with a malfunctioning or disabled reverse thruster should be grounded. Brazzil Magazine reports: " ... TAM's president, Marco Antonio Bologna, and the airline's vice president Ruy Amparo, confirmed that the reverse thruster wasn't working and had been turned off. According to them, however, this didn't represent any danger to the plane, since the jet's manual in these cases only recommend that the failed equipment be checked in ten days, but DOESN'T TELL to stop flying the aircraft. ... "
http://www.brazzilmag.com/content/view/8477/1/

The maintenance manual destroyed the airbus?

Flight professionals will permit an airplane to fly in any condition so long as the manual doesn't suggest grounding? Some aviation experts are echoing the airline's statement that the thruster was only "complementary," and not essential to the braking system - if so how to explain a PREVIOUS disaster at the airport was determined to be CAUSED by a faulty thruster - how is it possible if it is only "complementary," and not necessary is some situations to slow the jet? Brazzil reports: " ... In 1996, a reverse thruster failure was pointed as the reason for another crash in the SAME AIRPORT. At that time, a Fokker-100 also belonging to TAM crashed over a residential area, a few seconds after takeoff. killing 99 people."
http://www.brazzilmag.com/content/view/8477/1/

That was also a TAM ... and nothing was learned from the experience?

And there is this about-face. The news of thruster failure contradicts a previous statement: " ... TAM's chief executive, Marco Antonio Bologna, had said on Wednesday the aircraft was in PERFECT CONDITION. ... "
http://africa.reuters.com/world/news/usnN20326669.html

The TAM CEO "misspoke." Cover-up? Possibly. The airline was not forthcoming with news of the decoupled thruster - an investigation by Globo TV found the malfunction. Otherwise, if it had been left to TAM officials, the mechanical problem might not have been made public knowledge, and the cause would still be (as it was deemed following the initial reports) "pilot error."

However, one investigation - concucted by the Brazlian Air Force - has found that the speed of the plane on the Tarmac may have been partially due to an error. The newsweekly Veja published a report in late July claiming the plane's data recorder showed one of the jet's throttles was in the accelerate position instead of idle while touching down at Congonhas airport. This report was met with widespread skepticism, however, particularly among the families, who suspect that the story was concocted to ease criticism of the Luiz government.

The protests following the TAM crash have drawn thousands. Many marchers say that they doubt the latest accident report, AP reports, "because it would remove pressure from President Luiz Inacio Lula da Silva's administration, which came under withering criticism after the crash for failing to invest in airport infrastructure over the past five years amid a commercial travel boom. 'It's the best thing for Lula that could have happened,' said Gabriela Paulino, referring to the president by his nickname.
Mr. Paulino, a lawyer who did not know anyone on the TAM Airbus 320 but carried a single yellow rose for the victims added:'“Now they're going to blame the pilot because he's dead.'”
http://www.theglobeandmail.com/servlet/story/RTGAM.20070729.wbrazilcrash0729/BNStory/International/home

The investigation is highly secretive and tightly-controlled. The AP report: "Brazil's air force said in a statement that investigators have not disclosed any information about the plane's data recorder to outside sources." But somehow the report on the engaged thruster was leaked to the press. Times of India on July 29: "The Brazilian air force, which oversees civil aviation and accident investigations, said in a statement that no conclusion had been reached and that it had not leaked any information to the press."
http://timesofindia.indiatimes.com/Rest_of_World/Brazil_plane_crash_blamed_on_pilot_error_Report/articleshow/2241563.cms

" ... The accident is certain to have political ramifications, however, if only because the dead included Rep. Julio Redecker, 51, a leader of the opposition Brazilian Social Democracy Party and vocal critic of Silva's handling of the aviation crisis. ... "
---------------
Banco Santander - 2 Local Men Killed In Brazil Crash
Both Were Employees Of Banco Santander
July 19, 2007

MIAMI -- Two South Florida men were among the nearly 200 killed in the airplane crash in Sao Paulo, Brazil, Local 10 has learned.

The senior vice president of marketing and strategy for Banco Santander on Brickell Avenue confirmed Wednesday that two of their employees were on the airplane that crashed Tuesday. Pedro Abreau and Ricardo Tazoe, shown at right, were killed in the fiery crash. ...
---------
Banco Santander and Chavez

" ... Away from Chávez, his mouth and his oil, the Caracas financial community has been making serious money.… Venezuelan banks’ results that are the envy of the banking world, with returns on equity (RoE) of 33 percent the norm and 40 percent-plus RoE posted by pack leaders. International concerns are welcome to the party, too: Spain’s Banco Santander, which enjoys 15 percent of total market share, is a shining example. ... "
--------------
http://www.cnn.com/2007/WORLD/americas/07/20/brazil.crash.ap/index.html?iref=mpstoryview

SAO PAULO, Brazil (AP) -- One of the two thrust reversers on an airliner that crashed in a fireball was turned off when the plane landed, the jet's owner said Thursday.

Officials were trying to determine why the plane with 186 aboard raced down a runway instead of slowing down. The airline insisted late Thursday that the thrust reverser, used by jets to slow down just after touching down, had been deactivated earlier in accordance with proper maintenance procedures. ...

Brazil's Globo TV reported earlier Thursday that an unidentified problem in the Airbus-320's right thrust reverser emerged four days before the crash and was under investigation by authorities.

TAM, the airline, told Globo TV that Airbus maintenance rules approved by Brazilian aviation officials say the type of problem found must be inspected within 10 days and that the planes can fly in the interim. 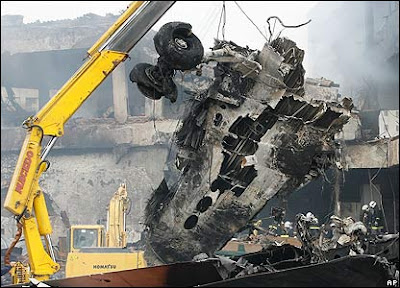 His government has come under fire for failing to deal with the nation's air travel safety problems. His only comment since the plane exploded Tuesday night was a brief statement of condolences issued hours later.

The opposition Social Democratic Party complained in a statement that Silva "hasn't appeared publicly to express his sorrow, or to give solidarity to the families of the victims and explain what measures are being taken" to prevent similar accidents.

The TAM Linhas Aereas SA jet had 186 people aboard and at least three people died on the ground after it slammed into a building owned by the airline, causing explosions and a fire that was still smoldering two days later.

By late Thursday, 188 bodies had been retrieved, but forensic examiners had identified only 25. ...

Meanwhile, authorities struggled to determine why the TAM jet raced down the runway after landing instead of slowing down just before it was blown apart in a series of explosions.

Security video released by the air force showed TAM Flight 3054 speeding down the tarmac more than four times as fast as other planes landing around the same time. That raised the possibility of pilot or mechanical error instead of a slick and short runway widely cited as a likely cause.

Brig. Jose Carlos Pereira, president of the national airport authority Infraero, said authorities must wait for an analysis of the black box to explain why the jet was going so fast.

Aviation officials insist Congonhas' 6,362-foot runway is not too short for safe operations, but pilots have long complained about slippery conditions during rainy weather and say the length allows small margin for error.

On Thursday, another TAM plane had to pull out of a landing after coming in at an unsafe angle, circled around and landed safely on its second attempt -- a fairly routine event at Congonhas.

A thrust reverser on the plane which crashed in Brazil, killing some 200 people, had been deactivated during maintenance checks, the airline says.

The reversers can be used to help jets slow down on landing but Tam Airlines insisted the deactivation was in accordance with proper procedures.

There has been intense speculation but no confirmation on the crash's cause.

But the crash has brought mounting calls for Congonhas airport to close.

Brazilian President Luis Inacio Lula da Silva, who has been criticised by opponents for his low profile since the crash, will address the nation on Friday and is expected to announce new measures on air safety. 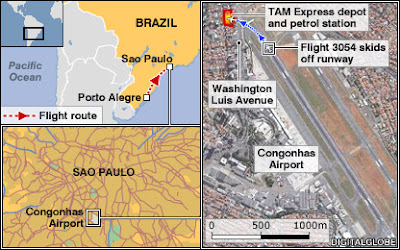 Tam Airlines said the right thrust reverser was "deactivated" at the time of the accident "in conditions stipulated by the maintenance of the manufacturer Airbus and approved by [Brazil's] National Civil Aviation Agency".

Tam Airlines' comments came after Brazil's Globo TV said a problem with the right thrust reverser had emerged four days before the crash.

Tam said Airbus's own manual says an inspection can be done up to 10 days after it is first detected and that the plane can continue to operate in the meantime.

Globo TV also reported that the same plane had problems landing at Congonhas the day before the crash.

The channel said the plane only managed to stop at the limit of the runway. The pilot told air traffic controllers it was very slippery but did not mention any other problems, the report said.

The crash occurred in wet conditions on a recently resurfaced runway that has been criticised as being too short.

New video footage shows some of the final moments of the Tam Airlines flight from the southern city of Porto Alegre, and another similar plane that had arrived earlier.

It appears to show the Tam plane travelling along one section of the runway at higher than normal speed.

It shows the first aircraft apparently taking 11 seconds to travel along the visible section, while the plane that crashed covers the same distance in three.

The Airbus 320 jet appears to continue speeding along the runway without slowing, before disappearing out of view. The flash of an explosion can be seen a short time later.

According to Globo TV, the Brazilian air force, which oversees the country's air traffic control system, believes the footage shows the plane was travelling at excessive speed.

As the plane careered towards the busy road nearby, one theory is that the pilot tried to take off again. The aircraft crossed the road and ploughed into a Tam Airlines building.

"That he jumped over the avenue was an indication he tried to take off. If he didn't [try to take off] he would have gone nose down at the end of the runway," Brig Jorge Kersul Filho, director of the Air Force's Centre for Investigation and Prevention of Air Accidents, said.

Some 180 bodies have been recovered from the burnt wreckage, says fire chief Nilton Miranda, adding another 20 bodies are expected to be found.

Most of the passengers and crew on board the flight were Brazilian.
Posted by Alex Constantine at Friday, July 20, 2007