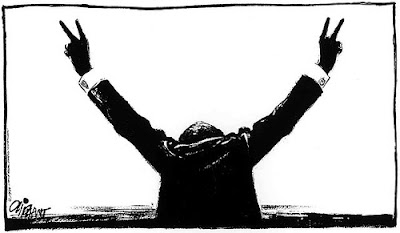 Bush administration officials unveiled a bold new assertion of executive authority yesterday in the dispute over the firing of nine U.S. attorneys, saying that the Justice Department will never be allowed to pursue contempt charges initiated by Congress against White House officials once the president has invoked executive privilege.

The position presents serious legal and political obstacles for congressional Democrats, who have begun laying the groundwork for contempt proceedings against current and former White House officials in order to pry loose information about the dismissals.

Under federal law, a statutory contempt citation by the House or Senate must be submitted to the U.S. attorney for the District of Columbia, "whose duty it shall be to bring the matter before the grand jury for its action."

But administration officials argued yesterday that Congress has no power to force a U.S. attorney to pursue contempt charges in cases, such as the prosecutor firings, in which the president has declared that testimony or documents are protected from release by executive privilege. Officials pointed to a Justice Department legal opinion during the Reagan administration, which made the same argument in a case that was never resolved by the courts.

"A U.S. attorney would not be permitted to bring contempt charges or convene a grand jury in an executive privilege case," said a senior official, who said his remarks reflect a consensus within the administration. "And a U.S. attorney wouldn't be permitted to argue against the reasoned legal opinion that the Justice Department provided. No one should expect that to happen."

The official, who spoke on the condition of anonymity because he was not authorized to discuss the issue publicly, added: "It has long been understood that, in circumstances like these, the constitutional prerogatives of the president would make it a futile and purely political act for Congress to refer contempt citations to U.S. attorneys."

Mark J. Rozell, a professor of public policy at George Mason University who has written a book on executive-privilege issues, called the administration's stance "astonishing."

"That's a breathtakingly broad view of the president's role in this system of separation of powers," Rozell said. "What this statement is saying is the president's claim of executive privilege trumps all."

The administration's statement is a dramatic attempt to seize the upper hand in an escalating constitutional battle with Congress, which has been trying for months, without success, to compel White House officials to testify and to turn over documents about their roles in the prosecutor firings last year. The Justice Department and White House in recent weeks have been discussing when and how to disclose the stance, and the official said he decided yesterday that it was time to highlight it.

The administration has not directly informed Congress of its view. A spokeswoman for Rep. John Conyers Jr. (D-Mich.), the Judiciary Committee's chairman, declined to comment . But other leading Democrats attacked the argument.

Senate Majority Leader Harry M. Reid (D-Nev.) called it "an outrageous abuse of executive privilege" and said: "The White House must stop stonewalling and start being accountable to Congress and the American people. No one, including the president, is above the law."

Sen. Charles E. Schumer (N.Y.) said the administration is "hastening a constitutional crisis," and Rep. Henry A. Waxman (D-Calif.) said the position "makes a mockery of the ideal that no one is above the law."

Waxman added: "I suppose the next step would be just disbanding the Justice Department."

Under long-established procedures and laws, the House and Senate can each pursue two kinds of criminal contempt proceedings, and the Senate also has a civil contempt option. The first, called statutory contempt, has been the avenue most frequently pursued in modern times, and is the one that requires a referral to the U.S. attorney in the District.

Both chambers also have an "inherent contempt" power, allowing either body to hold its own trials and even jail those found in defiance of Congress. Although widely used during the 19th century, the power has not been invoked since 1934 and Democratic lawmakers have not displayed an appetite for reviving the practice.

In defending its argument, administration officials point to a 1984 opinion by the Justice Department's Office of Legal Counsel, headed at the time by Theodore B. Olson, a prominent conservative lawyer who was solicitor general from 2001 to 2004. The opinion centered on a contempt citation issued by the House for Anne Gorsuch Burford, then administrator of the Environmental Protection Agency.

It concluded: "The President, through a United States Attorney, need not, indeed may not, prosecute criminally a subordinate for asserting on his behalf a claim of executive privilege. Nor could the Legislative Branch or the courts require or implement the prosecution of such an individual."

In the Burford case, which involved spending on the Superfund program, the White House filed a federal lawsuit to block Congress's contempt action. The conflict subsided when Burford turned over documents to Congress.

The Bush administration has not previously signaled it would forbid a U.S. attorney from pursuing a contempt case in relation to the prosecutor firings. But officials at Justice and elsewhere say it has long held that Congress cannot force such action.

David B. Rifkin, who worked in the Justice Department and White House counsel's office under presidents Ronald Reagan and George H.W. Bush, praised the position and said it is consistent with the idea of a "unitary executive." In practical terms, he said, "U.S. attorneys are emanations of a president's will." And in constitutional terms, he said, "the president has decided, by virtue of invoking executive privilege, that is the correct policy for the entire executive branch."

But Stanley Brand, who was the Democratic House counsel during the Burford case, said the administration's legal view "turns the constitutional enforcement process on its head. They are saying they will always place a claim of presidential privilege without any judicial determination above a congressional demand for evidence -- without any basis in law." Brand said the position is essentially telling Congress: "Because we control the enforcement process, we are going to thumb our nose at you."

Rozell, the George Mason professor and authority on executive privilege, said the administration's stance "is almost Nixonian in its scope and breadth of interpreting its power. Congress has no recourse at all, in the president's view. . . . It's allowing the executive to define the scope and limits of its own powers."
Posted by Alex Constantine at Friday, July 20, 2007