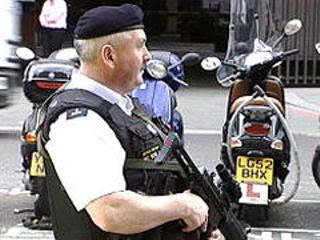 One of Britain's most senior police officers has demanded a return to a form of internment, with the power to lock up terror suspects indefinitely without charge.

The proposal, put forward by the head of the Association of Police Chief Officers (Acpo) and supported by Scotland Yard, is highly controversial. An earlier plan to extend the amount of time suspects can be held without charge to 90 days led to Tony Blair's first Commons defeat as Prime Minister. Eventually, the government was forced to compromise on 28 days, a period which Gordon Brown has already said he wants to extend.

The Observer understands that the Acpo proposal has been discussed in meetings between Brown and senior police officers. Whitehall sources said the PM was receptive to the association's demands, but believes an upper detention limit is essential to avoid a de facto Guantanamo Bay based in the UK.

Ken Jones, the president of Acpo, told The Observer that in some cases there was a need to hold terrorist suspects without charge for 'as long as it takes'. He said such hardline measures were the only way to counter the complex, global nature of terrorist cells planning further attacks in Britain and that civil liberty arguments were untenable in light of the evolving terror threat.

Jones, a former chair of Acpo's counter-terrorism committee, said: 'We are now arguing for judicially supervised detention for as long as it takes. We are up against the buffers on the 28-day limit. We understand people will be concerned and nervous, but we need to create a system with sufficient judicial checks and balances which holds people, but no longer than a day [more than] necessary.

'We need to go there [unlimited detention] and I think that politicians of all parties and the public have great faith in the judiciary to make sure that's used in the most proportionate way possible.'

The proposal has provoked anger among civil rights groups. 'It is coming to the point when we have to ask serious questions about the role of Acpo in a constitutional democracy,' said Shami Chakrabarti, director of the civil rights group Liberty. 'We elect politicians to determine legislation and we expect chief constables to uphold the rule of law, not campaign for internment.' Internment was last used in Britain during the Gulf war against Iraqis suspected of links to Saddam Hussein's army. It has also been used against terrorist suspects in Northern Ireland and Germans during the Second World War.

Jones said the increasingly international element of the terror threat made evidence-gathering a longer and more difficult process. He argues that a system is required where suspects can be arrested earlier than those suspected of involvement in more traditional crime.

'We can't let the threat develop to the point we ordinarily would, because the potential for a suicide bomber to take hundreds of lives is too awesome to merely contemplate, and so we are into the evidence-gathering phase much earlier,' he said.

'Then we are into judicially supervised detention. The fact is that these cases do take much longer to investigate. The reach of an investigation can be global. We are using a system designed to protect the rights of a suspect of a routine criminal case in the United Kingdom and we are pushing it to its limit.

'We should never have got involved in the 90-day debate. In hindsight, we should have said that we needed an extraordinary mechanism to give us the ability to investigate these complex cases under judicial supervision,' said Jones.

Moves to extend the police's power to hold suspects will be dealt with in a security bill in the autumn.

Jones also admitted Acpo had discussed problems of control orders, used as a form of house arrest for suspects, with the government. 'Clearly it's an idea that does need a refreshed view on it. But the solution of doing nothing is not an option really,' he said of the orders, which have been criticised after a number of those supposedly under their control absconded. Jones's comments chime with those made by the man in charge of reviewing the government's terrorism laws. Lord Carlile of Berriew said problems with the immigration service and Passport Agency left terrorists free to move in and out of Britain.

The Observer can also reveal that the criminal convictions of the leader of the 21/7 bomb plot, Muktar Said Ibrahim, were not disclosed to the immigration authorities when he applied to remain in the UK. In 1996 Ibrahim, originally from Eritrea, was given two prison sentences to run concurrently, one for three years, the other for two, for handling stolen goods, sexual assault and robbery. But the offences were not revealed to officials when they granted him leave to remain in April 2000 - despite the fact they were still running.

· Police yesterday charged another two men, one in Australia and one in Britain, in connection with the failed car bomb attacks on London and Glasgow last month. Dr Sabeel Ahmed, 26, will appear in court in London tomorrow. Dr Mohammed Haneef, 27, has appeared before Brisbane magistrates.
Posted by Alex Constantine at Friday, July 20, 2007