As lawmakers move to hold administration figures in contempt, Jeffrey Taylor would be the prosecutor - pitted against his bosses.
By Richard B. Schmitt
Los Angeles Times
July 22, 2007 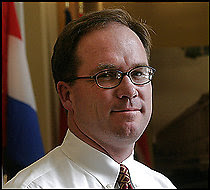 WASHINGTON — For months, congressional investigators have been pursuing allegations that the Bush administration tried to influence cases handled by U.S. attorneys across the country in ways that would benefit the Republican Party.

Now that investigation is near an impasse because the administration appears to be telling a U.S. attorney what to do.

The prosecutor, Jeffrey A. Taylor, is the U.S. attorney for the District of Columbia. Under federal law, Taylor's office is required to pursue cases in which people are found to be in contempt of Congress.

With lawmakers on Capitol Hill moving toward holding in contempt past and present administration officials, including former White House Counsel Harriet E. Miers, for failing to cooperate in the probe into the firing of eight U.S. attorneys last year, Taylor could soon become a central figure in the drama.

The White House and Justice Department are sending strong signals that they will bar anyone from prosecuting such a case. Despite a federal statute referring to the U.S. attorney's duty to take contempt cases to the grand jury, they believe it would be impermissible under the law, and violate the doctrine of separation of powers under the Constitution.

The position is roiling congressional investigators planning their next step in the probe, which has hit a wall with the White House's refusal to turn over documents and make officials available for public questioning under oath.

It is also leaving Taylor, 42, facing a test of his own independence from his bosses at the Justice Department.

Taylor is a loyal Republican who has served as a top lawyer for both Atty. Gen. Alberto R. Gonzales and former Atty. Gen. John Ashcroft.

He was originally appointed interim U.S. attorney by Gonzales under a law that was repealed by Congress this spring because it did not allow the Senate to approve his appointment.

He was later nominated by Bush, although the Senate has yet to officially confirm him.

Some legal experts think Taylor might have to disqualify himself from participating in a contempt-of-Congress investigation because of his close ties to the administration.

He once occupied a fifth-floor office at the Justice Department just a few doors from that of D. Kyle Sampson, Gonzales' chief of staff — a principal figure in the prosecutor purge who later resigned.

Taylor, a native of Northern California, also is a career prosecutor who once worked as an assistant U.S. attorney in San Diego.

Democratic friends and foes have characterized him as reasonable and thoughtful.

He helped initiate an internal Justice Department investigation this spring into whether former Gonzales aide Monica M. Goodling used a political litmus test to judge candidates for career prosecutor positions — a potential violation of federal law. Taylor referred the matter to investigators after Goodling tried to hold up the application of a Howard University law graduate who worked in the civil rights division of the Environmental Protection Agency because she feared he was a "liberal Democrat."

"We come from different political points of view, and we had healthy disagreements and debates and still do," said Steven M. Dettelbach, a former federal prosecutor and Taylor's roommate at Harvard Law School. "But I always found him to be a straight guy and a smart guy."

Dettelbach added: "In a way, he is fairly well situated to be weighing in on this because he has had direct experience working in both of the two branches that are going to be at odds here." Taylor worked for two years as an aide to Sen. Orrin Hatch (R-Utah) on the Senate Judiciary Committee, where among other things, he worked on the USA Patriot Act.

The Justice Department this month first cast doubt on whether it would pursue a contempt case against Miers or others.

Its Office of Legal Counsel issued an opinion saying that Miers did not have to appear before the House Judiciary Committee to answer questions about the U.S. attorney firings, even though she had been subpoenaed by the panel. The legal opinion cited the doctrine of executive privilege.

The department went a step further Friday, circulating copies of a 1984 opinion issued by the Justice Department. The opinion concluded that the statute under which Congress refers contempt charges to Justice officials "does not apply to executive officials who assert claims of executive privilege at the direction of the president."

White House spokesman Tony Snow told reporters Friday that the U.S. attorney wasn't required to prosecute in such circumstances and that President Bush would not allow it.

"There are serious separation of powers issues here, and … the legislative branch is not in a position to compel action on the part of the executive branch, other than in areas related to its legitimate oversight role," Snow said. "In circumstances like this, the constitutional prerogatives of the president make it futile and purely political for Congress to refer to a U.S. attorney a contempt citation."

Whether Taylor agrees with that view of the law is unclear; he declined a request for an interview.

Justice Department legal opinions, unless they are expressly disavowed, are considered official department policy. By holding this one up as good law, the department puts Taylor in a difficult spot.

The 1984 opinion was issued during a battle over demands from Congress for Environmental Protection Agency documents concerning enforcement of hazardous-waste laws. The House found then-EPA Administrator Anne Gorsuch Burford in contempt for refusing to turn over the materials, but the Justice Department refused to prosecute her in that case.

Some legal experts questioned interpreting the law to mean that persons who cite executive privilege for failing to cooperate are exempt from prosecution.

The contempt statute refers such matters to "the appropriate U.S. attorney, whose duty it shall be to bring the matter before the grand jury for its action."

It is "unambiguous," said Peter Shane, an Ohio State law professor who is an expert in executive privilege.

Shane suggested that the Justice Department appoint a special counsel to evaluate the merits of the case and the legal arguments. "The administration could file legal briefs on behalf of the defense," he said, "and it would give the defendant an opportunity to raise executive privilege in defense of nonappearance."

White House spokesman Tony Fratto said Friday that all this discussion was premature and that the administration hoped lawmakers would accept its offer to provide access to officials and documents — in private with no oaths or transcripts.

"We have made an offer of accommodation," he said. "There is no reason to go down this route.
Posted by Alex Constantine at Monday, July 23, 2007