Mohammed Haneef: Another Pawn in the Terrorist Game 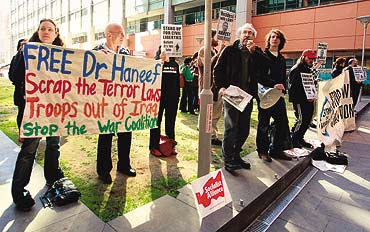 Once the newshounds in Australia were convinced about the seemingly weak case against terror suspect Mohammed Haneef, they began to speculate furiously on why Prime Minister John Howard's government was obstinately hung up on detaining the 27-year-old doctor from Bangalore. And they did have ample reason to look for ulterior motives—here was a man who was interrogated in detention for 14 harrowing days before being charged for "recklessly" supporting a terrorist group in the UK; someone who had been granted bail on rigorous conditions, including a surety bond of 10,000 Australian dollars. Even as these formalities were being completed, he found his immigration visa had been revoked, that he was to be held in Brisbane's high security prison—and that too in solitary confinement for 23 hours everyday—because he had been tagged as a "terrorist prisoner". So what the Brisbane magistrate's court found safe—that Dr Haneef could face trial while on bail—the government thought was extremely risky.

The Howard government's motive, according to conspiracy theorists, is age-old, one which has often inspired even Indian politicians to play sinister games. Yes, it's about the Howard government's determination to raise the spectre of a security threat to bolster its flagging position in the opinion polls prior to the national elections later this year. Howard's own past has imparted credibility to the theory. In August '01, his government refused to allow 433 people, picked up from a leaking boat by a Norwegian vessel, to land on the Australian mainland, insinuating that they may be potential terrorists and stoking fears of the country being swamped by foreign hordes. The issue was still in focus when 9/11 happened which gave a massive boost to the government's stand. Months later, Howard won the election.

This time, though, the conspiracy theory has gained currency among common Australians as well. One letter to the editor in The Australian newspaper cites the Haneef case to say, "It is an act of persecution. Simply, this government shames us all." A second read, "Seems somebody is clutching at straws to justify two weeks of very expensive investigation." And yet a third described Haneef as a "fat worm on the hook" with an election coming up, adding, "The liberals won't let him go now as he is to be the bait they will use to try to capture the voting public." Adding heft to these letters from aghast readers is Peter Bailey, a legal expert at the Australian National University, Canberra, who lamented to Outlook, "It's the bloody government up to its tricks again, trying to whip up things just before the elections."

But it's unlikely Howard will succeed this time around. An editorial in The Sydney Morning Herald (SMH) said as much, "If opinion polls are to be believed, voters have a diminishing appetite for political stunts. In an election year, when politics cannot be avoided, that may be the ultimate verdict." The opposition Labor party has refused to be sucked into the Haneef debate, merely saying it gives support to the government, in principle, on the issue—and is letting the tussle between the judiciary and the executive play itself out in the media. At one stage, though, Queensland premier Peter Beattie, who belongs to Labor, exclaimed, "I don't mean to be critical of them other than to say, for God's sake, explain to the Australians why you have taken this course of action."

An explanation of the accusations against Dr Haneef was reported by Outlook last week.

He was detained at the Brisbane airport on July 2 because he had a one-way ticket to India, "incriminating" because his cousin Kafeel had the previous day driven a flaming jeep into a Glasgow airport terminal; he was subsequently charged for "recklessly" supporting the terror group because he had, before leaving the UK for Australia, given his SIM card to Kafeel's brother, Sabeel Ahmed, who had been picked up from Liverpool. One of Haneef's lawyers, Peter Russo, says the word "reckless" isn't appropriate to describe what Haneef did.

Still, the Haneef issue could have blown away but for immigration minister Kevin Andrews revoking the Bangalore doctor's visa.

This is about the Howard regime raising the security flag to bolster its flagging ratings, ahead of the national elections later this year.

The minister justified the act saying he had a responsibility to ensure that people on an immigration visa did not breach requirements that they be of "good character"; and that he had "reasonable suspicion" about Haneef's links to terrorists. A miffed Russo told Outlook, "Without going into the very complex and complicated legal process, suffice to say we have decided to challenge the government's decision to revoke Haneef's visa and have accused it of misusing its discretionary powers in doing so." The hearing on the visa issue is due on August 8.

Justice Jeffrey Spender, who heard the visa case, questioned Andrews' definition of good character. The SMH reported that Justice Spender even told government counsel Roger Derrington that "he (Spender) himself had associated with persons involved in criminal activity (during his days as a lawyer). 'I have defended them, charged with murder. Unfortunately, I wouldn't pass the character test...,' he said."

Other legal experts too have expressed outrage, saying the government's decision to detain Haneef will jeopardise his chances for a fair trial.

"There are several places where the government may be seen to be in contempt of court," explains legal expert Bailey. "No minister to my knowledge has disregarded a court order in this way, and to take away his visa without sufficient reason is an attempt to exclude the court from the Migration Act. It's

A taped AFP interview of Haneef has him saying he called the UK cops to tell them about the SIM card. But the calls didn't go through.

It's not enough for Andrews to say that he is satisfied that Haneef poses a terror threat to society here without explaining why." (The terror case is in the Brisbane magistrate's court, the visa case is in a federal court.)

Similarly, Tim Bugg, president of the Law Council of Australia, representing the country's 50,000 lawyers, told the SMH, "We're very critical of the position the minister (Andrews) has adopted. The procedure he followed was cloaked in secrecy. It's one in which the doctor had no ability to represent his position...." John Dowd, president of the executive committee of the International Commission of Jurists Australia, has been quoted saying, "Governments ought to respect decisions by the courts...the world now knows this government waited until the release on bail to do it (revocation of the visa). And you don't have to be terribly bright to work out the sequence of events."

Meanwhile, the Indian government's response has been deplorably passive. Considering its own dubious record of detaining terror suspects for years without trial, it came as no surprise that though New Delhi hauled up the Australian high commissioner John McCarthy to express dismay over the revocation of Haneef's visa, its 'criticism' was more rhetorical than substantial.

Asked to explain what the Indian government expected of Canberra, a senior source in the India mission here said, "We request that Haneef, who has been linked by the Australian Federal Police (AFP) to the failed terrorist plots in London and Glasgow, be given a fair and just trial under Australian law." The source didn't even express outrage at a case that is becoming more bizarre by the day, and instead chose to talk about the possible backlash against the Indian community here.

One of the strange twists to the case has been The Australian newspaper publishing the text of the AFP's taped interview of Haneef. In it, Haneef denied he had ever been asked "to take part in jehad or anything that could be considered similar to jehad". He further told the AFP that he had, at his father-in-law's bidding (after his cousins were arrested in the UK), called the British police to tell them about the SIM card he'd given to Sabeel. But these calls went unanswered. Stephen Keim, Haneef's barrister, leaked the report to the press because he said he was tired of the selective leaks by the police and the government to bias the public against the Indian doctor.

Ironically, some now feel the Haneef case has come as a boon for Indo-Aussie relations. Says Rory Metcalfe, India expert at the Lowy Institute, an independent think-tank in Sydney, "The two countries have talked a lot about counter-terrorism cooperation, but other than posting an AFP officer there some time last year, neither country has made a big effort. This could be the shock to the system that actually makes things happen." Adds Hugh White, head of the strategic affairs institute at the Australian National University, "Both countries share growing concerns about Islamic terrorism and traditional expectations on both sides are not that diverse," thereby indicating that things need to become a bit worse before it can affect bilateral ties.

Back in the UK, Sabeel has been charged under the Terrorism Act with possessing information which he "knew or believed may be of material assistance in preventing the commission by another of an act of terrorism". The police charge does not specify as yet just what they say Sabeel knew. A court will now have to consider what he knew or could have done to stop brother Kafeel. (He is yet to be formally charged as he is convalescing from the burns injuries in hospital.)

For the present, the abortive terror jobs have become a bit of a joke. The Sun has even called it 'Moron Terror'. Says Rachel Briggs, terrorism expert at the Demos think-tank, "It doesn't take a rocket scientist—or a doctor—to know that driving a jeep into an airport is never going to cause much damage. There's nothing you can do to harm a terrorist more than point at their inadequacies. There's actually been a quite humorous side to this." An explosion of Islamic rage has become a matter of mirth for people—and needlessly tragic for poor Haneef in Australia.

By Janaki B. Kremmer in Sydney with inputs from Sanjay Suri in London
Posted by Alex Constantine at Saturday, July 21, 2007