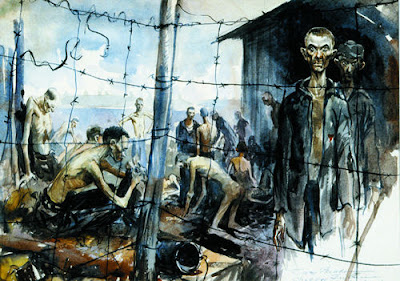 Weimar, Germany - Former inmates of the Buchenwald concentration camp in the east of Germany warned Sunday against downplaying the dangers of fascism. Attempts to honour the victims of Nazi crimes were being overshadowed by the global spread of wars, nationalism and racism, said the president of the international Buchenwald committee, Bertrand Herz.
He was speaking at a ceremony to mark the 70th anniversary of the construction of the largest concentration camp in Hitler's Germany, where 56,000 people lost their lives.

"In 1945, we never dreamed that today in Germany there would again be right-wing forces that would be allowed to demonstrate in our cities," Ottomar Rothmann said.

Democratically guaranteed constitutional rights should not be seen as a licence for rallies by fascist groups, Rothmann said, who spent two years in Buchenwald as a political prisoner.

Rothmann urged German politicians to do all they can "to ban the neo-Nazi NPD," a reference to the extreme right wing political party that is represented in two regional parliaments in eastern Germany.

A potential ban has been supported by several political leaders, including Berlin's social-democratic mayor, Klaus Wowereit, but legal hurdles remain.
The last attempt to ban the NPD was dismissed by Germany's constitutional court in 2003.

Sopme 250,000 people from 36 countries were incarcerated in Buchenwald until it was liberated by the US Army on April 11, 1945.

Located near the cultural city of Weimar, the camp is now a memorial site visited by around 600,000 people annually.