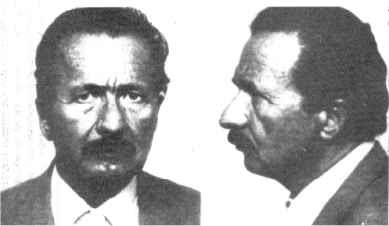 Head of a 2400 member secret Masonic Lodge, P2, a neo-fascist organization, in Italy that catered to only the elite, Gelli had high connections in the Vatican, even though he was not a Catholic. P2's membership is totally secret and not even available to its Mother Lodge in England. Gelli was responsible for providing Argentina with the Exocet missile. He was a double agent for the CIA and the KGB. He assisted many former Nazi high officials in their escape from Europe to Central America. He had close ties with the Italian Mafia. Gelli was a close associate of Benito Mussolini. He was also closely affiliated with Roberto Calvi, head of the scandal-ridden Vatican Bank. Calvi was murdered. Gelli's secret lodge consisted of extremely important people, including armed forces commanders, secret service chiefs, head of Italy's financial police, 30 generals, eight admirals, newspaper editors, television and top business executives and key bankers - including Calvi. Licio Gelli and others in P2 were behind the assassination of Pope John Paul 1.

The central figure in Europe and South America that linked the CIA, Masonic Lodge, Vatican, ex-Nazis and several South American governments, the Italian government and several international banks was Licio Gelli. He, with Klaus Barbie and Heinrich Rupp, met with Ronald R. Rewald in Uruguay to arrange for the Argentine purchase of the French-made Exocet missile, used in the Falkland Island attack to kill british soldiers.

Who is Gelli and why was he so important?

To understand Gelli, one must understand the complex post war years of Europe. The biggest threat to Europe in pre-war times was Communism - it was the great fear of Communism that gave birth to the Fascists and the Nazis. Though both sides were dreaded, the Fascists represented right-wing government, while the Communist represent left-wing government. It was the right-wing that the United States and the Catholic Church desired over Communism - because Communism would destroy the capitalistic system. This is why the CIA and the Vatican had go through with Operation Paperclip. The Nazis had massive amounts of Soviet intelligence, had infilitrated Communist partisans, and were in no way going to be given up to the Soviet Union.

Gelli worked both sides. He helped to found the Red Brigade, spied on Communist partisans and worked for the Nazis at the same time, a double agent. He helped establish the Rat Line, which assisted the flight of high ranking Nazi officials from Europe to South America, with passports supplied by the Vatican and with the full acknowledgment and blessing of the United States intelligence community. While on one hand, the U.S. participated in the war crime tribunals of key Nazi officials and maintained an alliance with the Communist Soviet Union, secretly, the U.S. was preparing for the cold war and needed the help of Nazis in the eventual struggle the U.S. would have with the Soviet Union. Gelli's agreement with U.S. intelligence to spy on the Communists after the war was instrumental in saving his life. He was responsible for the murder and torture of hundreds of Yugoslavian partisans.

The Vatican provided support to Nazis and Fascists because the Communists were the real threat to the Church's survival. The Italian Communists would have taxed the Church's vast holdings and the Church has had a dismal experience with Communist governments throughout the world - where religious freedom was stamped out.

Gelli was well connected with the Vatican from the days of the Rat Line and he worked for American intelligence, as well. Gelli formed the P-2 Masonic Lodge-which did not follow the direction of any Grand Lodge-and it was supplied with a sum of $10 million a month by the CIA. Its membership was a Who's Who in the intelligence, military and Italian community. So prominent was Gelli's influence, that he was even a guest of honor at the 1981 inauguration of President Ronald Reagan.

Gelli used blackmail in order to gain prominent members of his P-2 lodge, its membership is estimated at 2400 members, including 300 of the most powerful men in the Western World.. He was a close friend of Pope Paul VI, Juan Peron of Argentina, Libyan Dictator Muammar el-Qaddafi, and many high officials in the Italian and American governments - he is also reported to have had some financial dealings with the George Bush for President campaign.

Gelli and his P-2 lodge had staggering connections to banking, intelligence and diplomatic passports. The CIA poured hundreds of millions of dollars into Italy in the form of secret subsidies for political parties, labor unions and communications businesses. At the same time the Agency continued its relationship with far- right and violent elements as a back-up should a coup be needed to oust a possible Communist government. This covert financing was exposed by the Prime Minister of Italy in a speech to Parliament. He indicates that more than 600 people in Italy still remain on the payroll of the CIA. Licio Gelli was an ardent Nazi and a perfect asset of the CIA. As part of Reinhard Gehlen's intelligence team, he had excellent contacts. Licio was the go between for the CIA and the Vatican through his P2 Lodge.

Project Paperclip was stopped in 1957, when West Germany protested to the U.S. that these efforts had stripped it of "scientific skills." There was no comment about supporting Nazis. Paperclip may have ended in 1957, but as you can see from Licio Gelli and his international dealings with the CIA in Italy/P2, and Heinrich Rupp with his involvement in October Surprise, the ramifications of Paperclip are world-wide. The Nazis became employed CIA agents, engaging in clandestine work with the likes of George Bush, the CIA, Henry Kissenger, and the Masonic P2 lodge. This is but one of the results of Operation Paperclip. Another umbrella project that was spawned from Paperclip was MK-ULTRA.

A secret laboratory was established and funded by CIA director, Allen Dulles in Montreal, Canada at McGill University in the Allen Memorial Institute headed by psychiatrist Dr. Ewen Cameron. For the next several years Dr. Ewen Cameron waged his private war in Canada. What is ironic about Dr. Cameron is that he served as a member of the Nuremberg tribunal who heard the cases against the Nazi doctors.

When it was at its height in drug experiments, operation MK-ULTRA was formed. This was the brainchild of Richard Helms who later came to be a CIA director. It was designed to defeat the "enemy" in its brain-washing techniques. MK-ULTRA had another arm involved in Chemical and Biological Warfare (CBW) known as MK-DELTA. The "doctors" who participated in these experiments used some of the same techniques as the Nazi "doctors". Techniques used by Dr. Cameron and previous Nazi scientists include electro shock, sleep deprivation, memory implantation, memory erasure, sensory modification, psychoactive drug experiments, and many more cruel practices.

Project Paperclip brought us MK-ULTRA. Paperclip ultimately brought in key players involved in the Assassination of Pope 1, October Surprise (sabotage of Carter's peace talks), and a great many other things still classified to this day. The results of Project Paperclip were devastating, and very far reaching. I guess that is what you would expect from collaborating with Nazis.

This research shows that the OSS/CIA that was formed in the National Security Act, the same agency that employed hundreds of Nazis, has been in alliance with the Vatican through various Agency connections such as Licio Gelli. The CIA/Vatican alliance that Assassinated Pope John Paul 1, JFK, and hundreds of dictators of 3rd world countries is the Illuminati.

The Bavarian Illuminati has been around for centuries in one way or another. It's presence in the 20th century is the direct result of the Nazis. The Nazi connections to the occult and the Bavarian Thule Society were parallel to the American members of 33rd degree Freemasonry. When the Operation Paperclip was successfully executed, the Nazi element of the Bavarian Thule society was fused with the American members of Freemasonry to create the Illuminati.

Operation Paperclip, MK-ULTRA, October Surprise, and George Bush are all facets of the Illuminati, a group whose ideals are rooted in the occult, and dedicated to world domination.

Soon after the American Revolution, John Robinson, a professor of rural philosophy at Edinburgh University in Scotland and member of a Freemason lodge, said that he was asked to join the Illuminati. After studying the group, he concluded that the purposes of the Illuminati were not compatible with his beliefs.

In 1798, he published a book called "Proofs Of A Conspiracy," which states:

"An association has been formed for the express purpose of rooting out all the religious establishments and overturning all the existing governments.... The leaders would rule the World with uncontrollable power, while all the rest would be employed as tools of the ambition of their unknown superiors."