Nazi Germany’s “War on Terror”: The Warnings of History 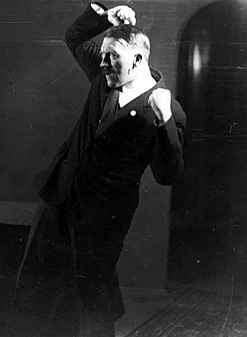 Germany – February 27, 1933: It started when the government… received reports of an imminent terrorist attack. A foreign ideologue had launched feeble attacks on a few famous buildings… When an aide brought him word that the nation's most prestigious building was ablaze, he verified it was the terrorist who had struck and then rushed to the scene and called a press conference.

"You are now witnessing the beginning of a great epoch in history," he proclaimed, standing in front of the burned-out building, surrounded by national media. "This fire," he said, his voice trembling with emotion, "is the beginning." He used the occasion - "a sign from God," he called it - to declare an all-out war on terrorism and its ideological sponsors, a people, he said, who traced their origins to the Middle East and found motivation for their evil deeds in their religion. – Thom Hartmann, March 16, 2003

The above depiction by Thom Hartmann of the beginning of Nazi Germany’s “War on Terror” took place less than a month after Adolf Hitler was appointed Chancellor of Germany.

Almost 75 years later, as we in the United States are faced with a president and vice president who increasingly make it clear that for the duration of their self-proclaimed “War on Terror”, they are to be held accountable neither to the rule of law nor to the Constitution that they swore to defend and protect, Americans (and especially their representatives in Congress) would do well to recall a similar period in German history. Hartmann continues his narrative:

Hitler’s war on terror on the domestic front

Two weeks later, the first detention center for terrorists was built in Oranianberg to hold the first suspected allies of the infamous terrorist. In a national outburst of patriotism, the leader's flag was everywhere, even printed large in newspapers suitable for window display.

Within four weeks of the terrorist attack, the nation's now-popular leader had pushed through legislation - in the name of combating terrorism and fighting the philosophy he said spawned it - that suspended constitutional guarantees of free speech, privacy, and habeas corpus. Police could now intercept mail and wiretap phones; suspected terrorists could be imprisoned without specific charges and without access to their lawyers; police could sneak into people's homes without warrants if the cases involved terrorism.

To get his patriotic "Decree on the Protection of People and State" passed over the objections of concerned legislators and civil libertarians, he agreed to put a 4-year sunset provision on it: if the national emergency provoked by the terrorist attack was over by then, the freedoms and rights would be returned to the people, and the police agencies would be re-restrained. Legislators would later say they hadn't had time to read the bill before voting on it.

Immediately after passage of the anti-terrorism act, his federal police agencies stepped up their program of arresting suspicious persons and holding them without access to lawyers or courts. In the first year only a few hundred were interred, and those who objected were largely ignored by the mainstream press, which was afraid to offend and thus lose access to a leader with such high popularity ratings. Citizens who protested the leader in public - and there were many - quickly found themselves confronting the newly empowered police's batons, gas, and jail cells, or fenced off in protest zones safely out of earshot of the leader's public speeches…

Within the first months after that terrorist attack, at the suggestion of a political advisor, he brought a formerly obscure word into common usage. He wanted to stir a "racial pride" among his countrymen, so, instead of referring to the nation by its name, he began to refer to it as "The Homeland" … and the beginning of an us-versus-them mentality was sewn.

Our land was "the" homeland, citizens thought: all others were simply foreign lands. We are the "true people," he suggested, the only ones worthy of our nation's concern; if bombs fall on others, or human rights are violated in other nations and it makes our lives better, it's of little concern to us.

His propaganda minister orchestrated a campaign to ensure the people that he was a deeply religious man and that his motivations were rooted in Christianity. He even proclaimed the need for a revival of the Christian faith across his nation…

Hitler’s war on terror on the international front

Making himself the absolute dictator of his own country was not enough for Hitler. He soon decided that he must widely expand his powers, either to distract Germans from their domestic problems and help consolidate his rule over them, for the sheer glory of conquest, or in order to provide a screen for his genocidal intentions:

Playing on this new nationalism… he argued that any international body that didn't act first and foremost in the best interest of his own nation was neither relevant nor useful. He thus withdrew his country from the League of Nations in October, 1933…

To consolidate his power, he concluded that government alone wasn't enough. He reached out to industry and forged an alliance, bringing former executives of the nation's largest corporations into high government positions. A flood of government money poured into corporate coffers to fight the war against the Middle Eastern ancestry terrorists lurking within the homeland, and to prepare for wars overseas.

He began a campaign to convince the people of the nation that a small, limited war was necessary. Another nation… even though its connection with the terrorist who had set afire the nation's most important building was tenuous at best, it held resources their nation badly needed if they were to have room to live and maintain their prosperity. He called a press conference and publicly delivered an ultimatum to the leader of the other nation, provoking an international uproar. He claimed the right to strike preemptively in self-defense…

To deal with those who dissented from his policies, at the advice of his politically savvy advisors, he and his handmaidens in the press began a campaign to equate him and his policies with patriotism and the nation itself. National unity was essential, they said, to ensure that the terrorists or their sponsors didn't think they'd succeeded in splitting the nation or weakening its will. In times of war, they said, there could be only "one people, one nation, and one commander-in-chief", and so his advocates in the media began a nationwide campaign charging that critics of his policies were attacking the nation itself. Those questioning him were labeled "anti-German" or "not good Germans," and it was suggested they were aiding the enemies of the state by failing in the patriotic necessity of supporting the nation's valiant men in uniform. It was one of his most effective ways to stifle dissent…

The Germans developed a new form of highly violent warfare they named "lightning war" or blitzkrieg, which, while generating devastating civilian losses, also produced a highly desirable "shock and awe" …


Thoughts on our slide into tyranny

Many Americans who have not previously been too concerned about our slide into tyranny have recently started to take note. George Bush’s obstructing of Congressional investigations into his many crimes and impeachable offenses by refusing to comply with subpoenas, ordering witnesses not to appear before Congress, and then ordering his Justice Department not to pursue contempt charges, have opened the eyes of some. We will soon see whether or not these ominous events are sufficient to cause the American people to successfully demand the impeachment and removal from office of our tyrants. Perhaps if and when Bush declares martial law and cancels our 2008 national elections, many more Americans will be concerned – though it may be too late by then.

Yet it seems to me that the defining moment of our slide into tyranny came a long time ago – very shortly after George Bush’s “War on Terror” began. The rounding up of hundreds or thousands of people, throwing them into prison, holding them there indefinitely and subjecting them to daily abuse or torture, while disallowing them access to family or legal counsel, or the right to challenge their detention, should have been the defining moment for us. It should have been crystal clear at that time what kind of people George Bush and Dick Cheney are.

Yet they received tens of millions of votes in their bid for re-election – making that election close enough to steal. The question that I have is this: For those who believe that it is acceptable for the leaders of our country to unilaterally abolish the human rights of hundreds or thousands of our fellow human beings and subject them to a perpetual life in hell – do they deserve a democracy? Well, perhaps most of them are just uninformed, rather than callous. Who can say? But I think it’s a question well worth considering.

Let me put it another way: Unless and until enough people in this world evolve to the point where they become deeply concerned about this kind of cruel treatment perpetrated upon other human beings, I doubt that our world will ever know lasting peace.

Germany then – America then and now

Hartmann concludes his article by making some final comparisons, explaining where we now stand, and that the choice is ours:

Reflecting on that time, The American Heritage Dictionary left us this definition of the form of government the German democracy had become through Hitler's close alliance with the largest German corporations and his policy of using war as a tool to keep power: " fas-cism”: A system of government that exercises a dictatorship of the extreme right, typically through the merging of state and business leadership, together with belligerent nationalism."

Today, as we face financial and political crises, it's useful to remember that the ravages of the Great Depression hit Germany and the United States alike. Through the 1930s, however, Hitler and Roosevelt chose very different courses to bring their nations back to power and prosperity.

Germany's response was to use government to empower corporations and reward the society's richest individuals, privatize much of the commons, stifle dissent, strip people of constitutional rights, and create an illusion of prosperity through continual and ever-expanding war. America passed minimum wage laws to raise the middle class, enforced anti-trust laws to diminish the power of corporations, increased taxes on corporations and the wealthiest individuals, created Social Security, and became the employer of last resort through programs to build national infrastructure, promote the arts, and replant forests. To the extent that our Constitution is still intact, the choice is again ours.
Posted by Alex Constantine at Tuesday, July 24, 2007