"Operation Banner": British Army Did Not and Could Not Defeat the IRA 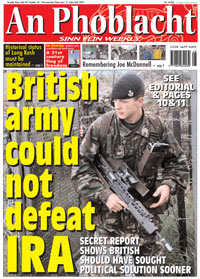 The Irish Republican Army is professional, dedicated, highly skilled and resilient, according to one of the British Army’s highest-ranking officers, General Mike Jackson. The assessment emerged after the British army was forced to publish an internal educational document under the Freedom of Information Act.

Last year three senior British army officers, including General Jackson, were seconded from normal duties for six months to analyse what became the longest operation undertaken by the British army – its campaign in the Six Counties over almost four decades – and draw conclusions for future engagements.

The 100-page document is intended as a “reflection on the hard experience, both on the streets and in the fields of Northern Ireland”. The document goes on to describe the British army’s military engagement against the IRA as one of the most important campaigns ever fought by the British army and its fellow services.

The British officers also acknowledged the scope, as well as the duration of the military campaign fought by the IRA, who they point out conducted a sustained and lethal campaign in the Six Counties, Britain and continental Europe. The British army concludes that the IRA developed one of the most effective “terrorist” organisations in history.

The British officers also bemoan effective republican information campaigns repeatedly pointing to the ability of the organisation and republican press to thwart British censorship and propaganda.

“Much of the motivation of the terrorists came through a wish to glamourise, a somewhat third-rate way of life, through esteem amongst the republican community or, more simply, in bars or with women, is one ludicrous conclusion the authors come to. Clearly educational standards required for Sandhurst leave a lot to be desired.

Codenamed by the British army, Operation Banner the campaign began with the deployment of three British army infantry battalions to the North of Ireland in 1969. But within two years, the inability of the British military to subdue the popular uprising emerging out of the Civil Rights Movement and spearheaded by the IRA, eventually lead to the deployment of around 30,000 British soldiers at over a 100 different locations.

According to the report in the early 1970s in Derry and Belfast when military engagements went on for days at a time it was fairly common for over 10,000 British troops to be deployed on the streets. In the course of the campaign more than 250,000 British soldiers were deployed in the North of Ireland as well as tens of thousands of members of the UDR.

Predictably British officers are not concerned with the suffering inflicted by the British army but the throw away comment: “Thousands of houses were destroyed and over 10,000 terrorist suspects were arrested” is a modest acknowledgement of the way in which the British army dealt with an insurgent civilian population.” Small wonder that within the Northern nationalist community and further afield British soldiers were viewed as the real terrorists.

The document has little to say about the imposition of the Falls Curfew and Bloody Sunday in Derry. Both are identified as British army failures, described as examples of poor decision making. But the authors have nothing to say about the death and destruction these “poor decisions” inflicted on the people of Belfast and Derry.

In July 1970 martial law was imposed on the lower Falls area of West Belfast. When British troops from the Black Watch and Life Guards began raiding homes in the Balkan Street area a gun battle ensued leading to the deployment of 3,000 British soldiers supported by armoured vehicles and air cover.

Around 50 streets were cordoned off while the British army rampaged through the area raiding homes and terrorising local families. The curfew was broken after thousands of women from throughout West Belfast marched on the area bringing milk and bread to beleaguered families in the lower Falls. Four civilians were shot dead and a further 60 were injured but loss of life and serious injury, other than their own, is not of undue interest to the British army.

The authors conclude that the imposition of the Falls Curfew was unsophisticated and unconvincing. The search also convinced most moderate Catholics that the army was pro-loyalist. The majority of the Catholic population became effectively nationalist if they were not already”, says the document.

Bloody Sunday is also given no more than a cursory glance and the only lesson drawn by the authors is restricted to a minor operation consideration. The British army “should not have used vehicles” in what the document characterises as an “arrest operation”, says the document. The British army has nothing to say about the 14 people killed and more injured by Paratroopers who opened fire on unarmed civilians attending a protest march in Derry.

Around 1,000 people were killed any many more injured by unionist paramilitaries during the British army's 37-year long operation and yet there is barely a reference to the UVF and UDA. The UVF is mentioned four times and the UDA three times.

Worse still the UDA is referred to as perhaps the most “respectable” of the unionist paramilitaries. Founded in 1971, the UDA carried out a brutal sectarian campaign of terror, mostly opting for soft Catholic civilian targets. Amongst its ranks have been some of the most notorious sectarian serial killers including Johnny Adair.

The UDA carried out a series of massacres including the Greysteele Halloween massacre and Castlerock murders in 1993. The UDA was also behind the siege of Holy Cross Catholic Girls’ primary school in North Belfast. The UDA is not only notorious for sectarian violence it has also engaged in large-scale criminality including drug dealing, prostitution and extortion.

It emerged this week that a UVF gang heavily infiltrated by British Crown forces, both RUC and UDR, planned to murder 30 Catholic school children in south Armagh. The plan was only thwarted after the Belfast based UVF intervened because it feared the British army led Glenanne gang had a double agenda designed to undermine the UVF.

The hundreds of references to the IRA as compared to the documents almost total disregard of loyalist violence exposes not only the colonial mindset of the British army who identified only one enemy, the IRA but also the ambiguity with which pro British violence is regarded.

Collusion is not discussed in the document and yet British state violence by proxy was a key strategy deployed by the British army through covert units like the MRF and FRU. Through agents like Brian Nelson, the British army retrained, reorganised and rearmed loyalist paramilitaries resulting in hundreds of deaths and injuries.

The document offers a hollowed out notion of success that is little more than window dressing for their political masters. It is redefined purely in terms of military disengagement without reference to any political objectives underpinning Britain's campaign. For example the British sought to criminalise and marginalise republicans and to defeat the nationalist demand for equality, justice and national reunification.

What the British face, after 37 years of armed conflict, is a vibrant and optimistic nationalist community intent on securing progressive change. Republicans remain just as professional, resilient and highly skilled, with the largest nationalist party and second largest political party in the North and the republican leadership at the heart of the decision making process.
The British government was forced to abandon its unilateral claim of sovereignty, redefine it in terms of consent and introduce a mechanism within which reunification can occur.

The British army did not and could not defeat the IRA. The shooting war stopped because of political progress gained through negotiation with republicans. The British officers acknowledge as much by stressing the need for political and social solutions from the outset of the outbreak of hostilities.

“The critical issue is the necessity of engaging all relevant agencies in early substantive visible action for reform in order to prevent insurgency or civil war breaking out”, conclude the British officers.

Simplistically the long term solution was not to deploy three battalions into the Divis flats but rather to bulldoze them and build decent respectable homes with proper amenities.

It’s a limited understanding of republican demands for social, economic and political justice but it’s an acknowledgement just the same. The British army's advocacy of political progress at all is testimony to the fact that they could not defeat republican demands militarily. In other words repression failed and Britain was forced to the negotiation table. The only lesson of history that the British can glean from this document is to negotiate sooner.
Posted by Alex Constantine at Sunday, July 22, 2007