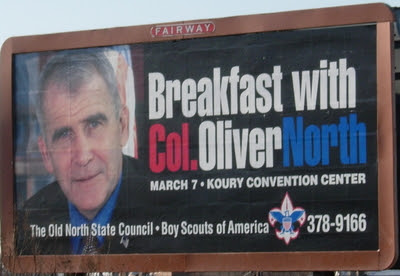 "NERVOUS? NOT UNCLE … We keep hearing Ted Stevens isn’t a target of federal investigators but Uncle Ted isn’t taking any chances. 'He has quietly hired Washington’s most powerful and expensive lawyer, Brendan Sullivan Jr., to deal with the feds,' reports the Washingtonian. Ted had no comment. ... " - Alaska Ear, The divine appendage, July 1, 2007 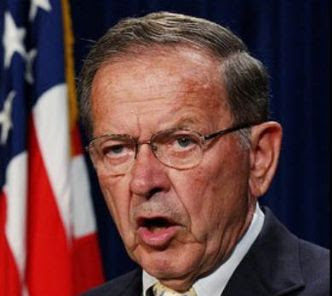 The move makes it look like Stevens isn't taking any chances in the ongoing federal probe into his dealings with Alaska oil services company Veco Corp.

Sullivan is used to going to bat for heavy weight defendants, including North, former HUD Secretary Henry Cisneros, who pled guilty to a single misdeamenor at the end of a $9 million probe, and four FBI agents involved in the 1992 Ruby Ridge shootout.

The US Government's probe on Cisneros' personal life that cost taxpayers $9m was brought to us, in part, by former Rove protegee Tim Griffin
...
Posted by:
Date: July 2, 2007 6:38 PM

Oliver North should have gone to prision for treason and obstruction of justice. Now he sits on Fox News and is held in the highest esteem by the idiot souless fools that watch Fox News. 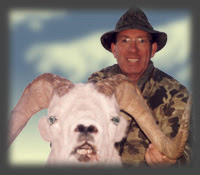 Ollie has made several appearances at the Temple - and so has Ted. Jerry's ties to the Alaskan Republican party go back as far and as deep as Ted's. 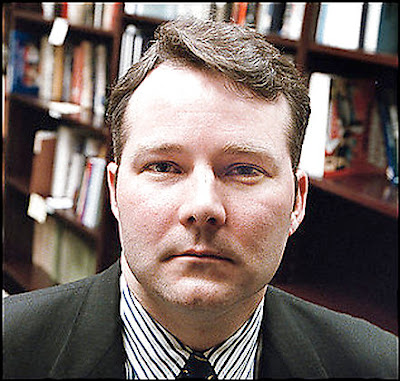 Griffin, a former protege of Karl Rove, was formerly research director of the Republican National Committee. In 2004, BBC News published a report showing that Griffin led a “caging” scheme to suppress the votes of African-American servicemembers in Florida.

Griffin became the poster boy for the politicization of the U.S. attorney process. Former Justice official Kyle Sampson noted that getting Griffin into office “was important to Harriet [Miers], Karl, et cetera.” The traditional 120-day term for “interim” U.S. attorneys had expired for Griffin on April 20, yet the Justice Department continued to allow him to serve.

ThinkProgress earlier spoke with Rep. John Boozman’s (R-AR) office, which said that the congressman submitted names of replacements for Griffin to the White House on March 30. So far, no word from the Justice Department on the name of the new U.S. attorney.

In the meantime, assistant U.S. attorney Jane Duke will take over. The Justice Department had previously passed her over to install Griffin, using sexual discrimination as an excuse because Duke had been on maternity leave at the time.

UPDATE: Today the Wall Street Journal reported that Griffin was in “discussions” about working for the possible presidential campaign of Fred Thompson. But the Arkansas Times reports that it’s still unclear whether he will join a campaign or go into the private sector.
-------------------- 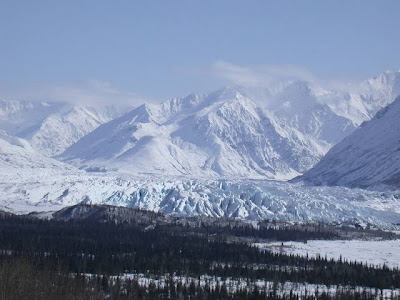 "There is always another day when those who bite will be killed, too, and I am very good at that," Young said. No kiddin'. He once waved an 18-inch-long oosik, the penis bone of a walrus, at the first woman to direct the U.S. Fish and Wildlife Service.

Young, the political architect of Alaska's "bridges to nowhere," was mad at a bid by Republican New Jersey Rep. Scott Garrett to cut one of his pet programs.

Not only did he go after Garrett, but Alaska's congressman went on to note that his opponent comes "from a state that doesn't have the greatest reputation in the world."

A few days later, The Wall Street Journal revealed that Young is under FBI investigation for his ties to VECO, the oil-field-services supplier whose president has pleaded guilty to paying off Alaska state legislators.

"Is two-thirds of the New Jersey congressional delegation currently being investigated by the FBI? Did New Jersey pols and lobbyists organize a Corrupt Bastards Club in the state capital? And get hats made?" the Alaska Ear column of the Anchorage Daily News asked.

Alaska has lately moved out in front of the Garden State when it comes to politicians for sale, for rent and ready to exchange favors.

The past year has seen a curtain pulled back on the crony capitalist insiders' network that has long run the 49th State, treating the "Great Land" as a grand treasure trove.

As usual, there's a key insider: In the 1970s, it was Jess Carr, the Teamsters Union leader whose local ran Alaska Pipeline construction with fists and featherbedding.

The go-to guy of recent times was VECO boss Bill Allen. VECO was the prime contractor in cleaning up Prince William Sound after the Exxon Valdez spill. VECO took in about $800 million of $2.5 billion spent by Exxon.

By bugging VECO's suite at Juneau's Baranof Hotel, the FBI recorded vote-buying that resulted in Allen and deputy Rick Smith pleading guilty to extortion and bribery, plus corruption charges against one legislator and two former colleagues.

Between 2002 and 2006, VECO paid $243,000 in consulting fees to the firm of state Senate President Ben Stevens, son of Alaska's U.S. Sen. Ted Stevens. What work the Stevens dauphin actually did is unclear. He has not -- yet -- been indicted.

Young received $157,000 from VECO employees and its political committee over the past decade. He amended campaign-finance filings this year to report $38,000 in payments to Allen for "fundraising costs."

And there is 83-year-old Ted Stevens, Alaska's senator for life. The FBI is investigating a 2000 project that more than doubled the size of his home in Girdwood, a ski town near Anchorage.

One contractor who worked on the house said he was told to send bills to VECO. He has said that someone in Allen's office examined the billing, then sent them to Stevens.

The Los Angeles Times did a 2004 study of "Uncle Ted's" personal finances. Stevens has become a millionaire by investing in partnerships with influential contractors. The same partners profited handsomely from spending items that Stevens put into the federal budget.

The Anchorage Daily News has regularly disclosed lucrative lobbying by former aides to Young and Stevens. An ex-Young staffer owns land near the terminus of a controversial proposed bridge. The family of former Gov. Frank Murkowski owns land on Gravina Island, destination of a planned bridge from Ketchikan.

Stevens, too, is given to threats. He vowed revenge on Sen. Maria Cantwell, D-Wash., after she blocked his backdoor bid to open the Arctic National Wildlife Refuge to oil and gas drilling.

In a final "predators' ball" of Alaska's elite, Stevens, Young and Allen headlined a fundraiser for Cantwell's GOP challenger Mike McGavick. McGavick ended up refunding $14,700 from VECO executives when news of the FBI inquiry became public.

A new north wind is blowing.

It blew away Murkowski in last year's Republican primary. The winner -- now governor -- was Sarah Palin, who blew the whistle on ethical misconduct while chairing the Alaska Oil and Gas Conservation Commission.

Anchorage Mayor Mark Begich is being recruited by Democrats to run against Young. Young is also under scrutiny for favors done for Florida businessmen who were big campaign donors.

The state's junior Sen. Lisa Murkowski -- appointed by her father when he was governor -- dodged a bullet last week. Murkowski and her husband announced they were selling back a choice Kenai River lot to a friend and real estate developer.

The resale came after a D.C. watchdog group filed a complaint against Sen. Murkowski, charging she paid far below market value and that the land deal amounted to an illegal gift.

"While Verne and I intended to make this our family home, and we paid a fair price for this land, no property is worth compromising the trust of the Alaska people," she said.

It's enough to bring tears to your eyes -- if you happen to be a crocodile.

The Federal Bureau of Investigation raided six Alaska state legislative offices, carrying away boxes of documents in what appears to be a probe into whether VECO Corp., an oil-field-services contractor with close political ties, engaged in influence peddling.

On Thursday and continuing on Friday, FBI agents launched a series of raids in Juneau and other cities, according to Alaskan legislative officials, pouring into offices that include those of State Senate President Ben Stevens, son of longtime U.S. Sen. Ted Stevens of Alaska. The agents sought documents and other records showing ties between the legislators and VECO and its executives, including Bill Allen, the company's chairman, the officials said.

VECO and its employees are major political-campaign contributors in Alaska, giving mostly to Republicans. In 2000, Mr. Allen was co-chairman of President Bush's Alaska state campaign.

John Harris, speaker of the Alaska House of Representatives, said his understanding is that the raids were tied to an FBI probe into whether VECO used its financial influence to try to secure votes on legislation related to a proposed natural-gas pipeline from the Alaskan North Slope.

As part of the push to ship to market all the natural gas that is now stranded at Prudhoe Bay and other big oil fields, VECO and other companies in the industry have pushed for construction of a pipeline to the lower 48 states. The Alaska legislature is considering one bill to help do that, but lawmakers have been squabbling over how much the state should have to pay for construction and other issues.

Last month, Alaska legislators passed a controversial measure that changed the way oil and gas is taxed in the state. Critics of the industry-backed bill say the new system taxes oil and gas based more on industry profits, rather than mainly on production, risking the potential for companies to reclassify some profits as expenses and thus evade taxes. However, supporters of the measure say the state stands to collect more money under the new tax plan.

Mr. Kohring issued a statement confirming that his offices in the state capital of Juneau and his district in suburban Anchorage were raided, and that FBI agents interviewed him as part of an investigation into VECO. "I was told I am not a target of the investigation," Mr. Kohring said in the statement, adding the FBI asked him not to say more.

A spokesman for Mr. Olson said he will cooperate with the investigation. Calls left for the other four legislators weren't returned. Officials for VECO -- an Anchorage-based oil-field-services company that maintains and repairs crude oil pipelines, refineries and other oil-field facilities -- didn't return calls for comment.

The FBI investigation is the latest cloud over the Alaskan oil industry. Corrosion problems at the giant Prudhoe Bay field have prompted investigations by the Environmental Protection Agency, the Department of Transportation and state agencies into the practices of British oil giant BP PLC, which operates the facility. Corrosion led to a spill of about 200,000 gallons of crude from one pipeline at Prudhoe Bay last March, and BP officials ordered much of the field closed last month after discovering the corrosion problems were more widespread.

The VECO case unfolded as a surprise to workers in Alaska's capitol building, who stood by as agents in sweatshirts and T-shirts swept into the building shortly before noon Thursday, spending hours rifling through legislators' offices. Some legislative aides who saw the agents say that at first they thought they were workers, because they were inside offices, like that of Mr. Stevens, which were closed while the legislature is out of session.

By nightfall, the agents left the building carrying boxes of documents, including binders, appointment books and other materials, two legislative aides said. The agents acted under search warrants that listed "Items to be seized," said one aide who obtained a copy of a warrant. Among the items listed in the warrant, the aide said, was: "Anything having to do with any and all documents concerning, reflecting or relating to any or all of the following entities," including VECO, Mr. Allen, several other VECO officials, two Republican pollsters in Alaska and the Petroleum Club in Anchorage, which has been used to host a number of GOP fund-raisers. The warrant called for a search of all written or electronic documents, said the aide.