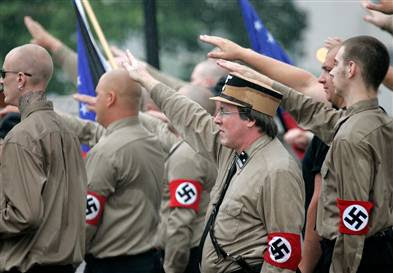 
HENDERSON - Letty Brown doesn't think the letter in her mailbox, the one that began "My dear white friends and comrades," was meant for her.

"In all my years, I've never seen anything like this on paper," she said Thursday. "I can't say I was angry. Sadness that this is still existing and you can just put a stamp on something like this and send it out."

What arrived in her mailbox Thursday, and in hundreds of others here recently, represents a growing conflict between a Virginia neo-Nazi group and the state NAACP, centered on a white man accused of chasing a black couple with a handgun while yelling racial slurs in June.

Granville County District Attorney Sam Currin, concerned either group may disrupt court proceedings, said he plans to move the case to Halifax County. "We're playing this by ear," he said.

Currin's address, along with those of the accusing couple and two NAACP members, was listed in the letter.

Bill White, co-founder of the American National Socialist Workers' Party, the group that sent the letters, said he and several others will be in court Aug. 8, the next time Anthony Dale Finch will face a judge, to "quietly and peacefully" observe.

"If the NAACP holds a rally or a press conference, we will be there to show our opposition," White wrote in an e-mail message.

The state NAACP, which has contacted the State Bureau of Investigation and the FBI regarding the letters, also may be in Oxford that day to "promote love and justice no matter what happens," said Curtis Gatewood of Durham, state NAACP second vice president.

Finch, 45, is accused of following James Maye and Dionne Hensley in his pickup truck while screaming racial epithets and pointing a gun at them June 8.

The couple encountered Finch after they placed a flier in a mailbox on U.S. 158 near Greenway Auto Salvage in Henderson, according to Oxford police. The couple, after noticing Finch was pursuing them, drove to the Oxford Police Department's parking lot, where Finch was arrested at gunpoint. Police said they found evidence of Finch's association with the Ku Klux Klan, including pictures and tattoos. He is accused of pointing a gun for ethnic intimidation, among other charges.

Gatewood has publicly supported the couple, holding news conferences and rallies. His address is among those listed on the flier.

"We're only seeking justice, and to have to contend with this level of hatred, to me, it shows that we are right," he said.

The letters were sent on the neo-Nazi group's letterhead to more than 1,400 homes to target the town's white households. They blame nonwhites for whites becoming poorer, and they urge support for Finch. The mailing is part of an action plan, one White wouldn't elaborate on.

"We aim to legally and peacefully wage a 'war of ideas' against the culturally destructive influence of the Jewish establishment and their pet Negroes in the NAACP," White said.

White sparked a riot after leading a march, with followers in full Nazi regalia, through a black neighborhood in Toledo, Ohio, in 2005 while part of another group, Potok said. He did the same thing in Orlando, Fla., last year. "If this group comes to town, they have the potential to set off violence," he said.

Finch said he does not want either group involved.

What happened June 8 was about protecting his family, not race, he said. Maye and Hensley threatened Finch's stepson, who helped get Maye fired from an auto salvage job because of poor work performance, Finch said. The couple was placing a flier defaming the business inside its mailbox when Finch arrived at a store across the street.

After he was told the couple had made threats against his stepson, Finch, a retired Henderson police officer of 23 years, followed the couple to obtain their vehicle information and file a warrant, he said. He never pointed a gun at the couple, he said, and the picture of a man wearing a pointy hood and robe found in his vehicle was taken at a Halloween party.

"If I wanted to hurt these people, I had six miles to do it," he said. "Why would I chase these people into a police department parking lot and circle it twice if I didn't want them to get identified?"

Finch and his wife have received threats since the incident and are shunned by others. It's as if he has been convicted before trial, he said.

The NAACP has made life difficult, he said. "Some days I don't even go out of the house," he said.

Maye and Hensley could not be reached for comment.

Henderson Police Chief Keith Sidwell said he hasn't heard of any threats of violence in town. While officers are looking into the letters, First Amendment rights prevent them from doing much.

"Any time one receives rhetoric like that, certainly we hope they understand that it is meant to inflame," he said. "We're fortunate in the fact that our citizens realize that's exactly what it is and nothing more."
Posted by Alex Constantine at Friday, July 27, 2007