"Counterinsurgency" in the Philippines: Enforced Disappearances an Act of Terror 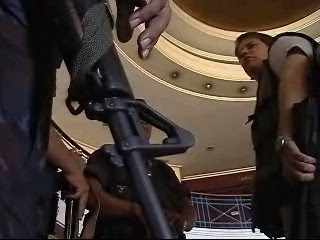 MANILA — Extrajudicial killings and enforced (or involuntary) disappearances have been rampant occurrences during the Marcos dictatorship and, during the Aquino, Ramos and Estrada administrations, there were also documented reports of their occurrences by human rights groups. These killings and disappearances of political activists and advocates have been known to be perpetrated with impunity by members of the Armed Forces of the Philippines (AFP), the Philippine National Police or PNP (formerly Philippine Constabulary) and paramilitary/vigilante groups armed and trained by the AFP/PNP. For even today, Kuratong Balelengs or the summary execution of criminal suspects (such as thieves, snatchers, drug pushers, etc.) are a common practice among stone-cold killers who also happen to be our law enforcers.

But no administration can match the frequency and methodical manner in which extrajudicial killings and enforced disappearances have occurred during the six years of President Gloria Macapagal Arroyo. But because there was sustained impunity, with the perpetrators not only still unpunished, but even promoted or even commended, they occur again and again with their own dirty rules. This time, they are part of what is referred to as the “Salvador Option” (with reference to the death squads of El Salvador in the 70s & 80s ) hatched by CIA operatives and their local cabal in military and civilian agencies involved in counterinsurgency.

What goes on into the mind of these perpetrators, probably professional killers or assassins?

The prolonged counterinsurgency war brings out the very worst aspect of human behavior, where the basic level of primordial instincts to survive are experienced. The human savage that lives inside all men, a remnant of the animal instinct, simplifies existence to just killing to survive and dying. Defeat insurgent terror with state terror. Everything else becomes insignificant. The professional warriors try to ignore the objectives and politics of the conflict, as they are totally consumed by getting the job done in special warfare against erstwhile suspected political cadre. It does not matter if this conflict is rooted and fueled by mass poverty, social injustice and abuses.

The intensive military training gives them a continual bonding process and they tend to protect each other, as if their lives depended on it. They have an unreasonable animosity toward those who raise issues of violations of human rights of their targets, while no one raises a howl or public outcry when their own ranks are decimated or killed by rebel insurgents in ambushes or sparrow operations. Thus, they hold a deep professional dislike for what they consider to be communist propagandists who are operating legally in the political arena and whom they assess to be operating as intelligence assets of their armed protagonists. These are the objects and targets of their U.S.-inspired “war on terror” activities. What they do in their own minds, strikes terror and panic for the enemy. Those armed as well as those operating legally, unarmed and though protected by the constitution, must be rooted out and destroyed, for they are part of the political and intelligency infrastructure of the insurgency. The enemy’s political infrastructure is for them, the snake’s head, the more dangerous prey in the war of attrition. You cut off the snake’s head in order to kill the body.

Their training in low intensity conflict warfare or special warfare reminds them that they must first engage in a surveillance of their target, track and record the subject’s daily routine until a pattern emerges that can be relied upon: where the subjects go, what they do when they arrive, how long they stay, whom they see and so on. Once these are established, they will firmly fix the target in their intelligence net, in place for what will come next — kidnapping, capture or termination — depending on the specific mission. This is why this type of work is always off limits to all but a few in the organization. In the United States, during the Vietnam War, as well as during the Clinton and Senior and Junior Bush administrations, the Central Intelligence Agency (CIA) was authorized to form specialized hunter-killer teams to abduct and terminate quality targets –both military and civilian — of the United States’ perceived enemies, after patiently and meticulously keeping them in the antennae of the intelligence community as targets.

In my study of counterinsurgency and counter-terrorist tactics, the real operators may be a few trusted operatives, but surely, they have the guidance of their superiors and CIA handlers, usually with specialty in intelligence and operations work, or clandestine operations. But assassination of civilians is not formally taught in intelligence schools. But in special operations training, they are taught the highly specialized art of “abduction of human targets”, an issue no one still on active duty in the “special ops” game will discuss. Their basic military courses taught them to fight enemy warriors, armed combatants who are ready to die in the battlefield — not snuff out the lives of civilian mass leaders of social movements: lawyers, priests and pastors, teachers, student leaders, labor union presidents and unarmed peasant organizers.

Capture or termination is the goal of what they have collected in their target folders, but temination is an option that requires total commitment on the part of those carrying out the mission, hunting and eliminating the enemy like animals.

Snatch, or kidnap and terminate the terrorists’ political infrastructure is their mission. They carry out their missions with no remorse or regret for anyway, their “terrorist” enemy gains control over their areas of responsibility by any means possible, including terror and murder. But make their lives hell on earth. Keep the pressure on and let your enemies know their lives are in danger every day, every minute, everywhere they go or hide.

But the strategy has fatally flawed assumptions. Physically attacking or conducting death squad operations against those who have opted to work openly for reforms in a parliamentary struggle will only push more to join the ranks of those who continue to fight with guns and bullets. For is it not better to exchange ideas and words, than exchange bullets, grenade explosions and mortar shells?

If the death squad or “Salvador Solution” is practiced, in a counterinsurgency war with no definite battlefields, it should be at the state’s peril. But let us not give the state another legal weapon to victimize more advocates and communities like the so-called Human Security Act (HSA) of 2007. In reality, the HSA is an ACT OF TERROR. It is, quite frankly, a terror act: to legalize the on-going state terrorism against legal social movements, people’s organizations, advocates, critics of the government in the media, and NGOs.

This is a terrible time in our country, and we must cleanse the nation of the brutal and destructive actions by its own security forces and law enforcement agencies. For can they, invoking our protection and “human security”, play god in their dirty war and violate the very Constitution and Bill of Rights which they have sworn to uphold and protect?

It is said that war brings out the very worst in men and women. The Central Intelligence Agency’s dirty tricks, like its involvement in assassinations of foreign political leaders, and military coups –which it had for so long consistently denied under oath– was only fully exposed because a few good men of conscience from the agency like former CIA field operatives Philip Agee and Ralph Mc Gehee decided that they have had enough. My point is, can this conflict not also bring out the very best in human beings, who by their conscience would finally say, “NO MORE” and reveal to us the perpetrators and masterminds of these murders of political activists, advocates for the poor, and human rights defenders?

My specific recommendations to this National Consultative Summit on Extrajudicial Killings and Enforced Disappearances are the following:

1. Strengthening of measures to protect witnesses as well as “whistleblowers” from government security units who may come out as state witnesses, thru legislation and improvements in Court Rules.

2. There should be more pro-active sanctions against military or police units who are not able to solve political murders or extrajudicial killings or enforced disappearances in their areas of responsibility / jurisdiction. Security forces which continue to demonize party-list organizations, people’s organizations, social movements and NGOs as “enemies of the state” should be disciplined.

3. Disbandment of the counterinsurgency plan Bantay Laya II, and the resumption of peace talks with the National Democratic Front (NDF) towards lasting peace based on substantive economic, political and social reforms, long-term poverty-alleviation programs and social justice measures.

4. Immediate passage of proposed legislation like the INVOLUNTARY DISAPPEARANCE ACT and the HUMAN RIGHTS COMPENSATION ACT.

(The author is a professor of development studies and public management at the University of the Philippines. He submitted this paper at the National Consultative Summit on Extrajudicial Killings and Enforced Disappearances, sponsored by the Supreme Court of the Philippines, Manila Hotel, July 16-17, 2007)
Posted by Alex Constantine at Monday, July 30, 2007