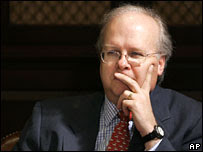 Two senior advisers to President George W Bush have been summoned to testify at a US Senate committee investigating the sacking of eight federal prosecutors.

The senators have so far failed to make any senior presidential aides testify.

Mr Bush has invoked his legal privilege to stop officials from being forced to give evidence in public on the issue.

The Democrats have also announced they will seek a perjury investigation to be carried out into Attorney General Alberto Gonzales in connection with the same case.

The White House has not yet commented on the latest developments.

The row over last year's firing of the prosecutors has been rumbling for several months.

Members of Congress, which has been controlled by the Democrats since the beginning of the year following mid-term elections, have been pitted against senior figures in the Bush administration.

Mr Gonzales, the nation's top law-enforcement officer and an old friend of Mr Bush, has faced repeated calls to resign over the affair.

Opponents say he fired the eight attorneys for political reasons and later lied about the reason for their dismissal.

Mr Gonzales, who retains Mr Bush's support, says he did nothing wrong. He points out that US attorneys serve at the will of the president, who can dismiss them at any time.

He has testified before committees in both houses of Congress, but senators now say he lied under oath.

Meanwhile, Democrats claim that Mr Rove will be able to shed light on the dismissals.

They say he knew of discussions about firing the attorneys nearly two years before the axe fell on them.

The president has previously offered to let Mr Rove and other aides speak privately to some members of Congress, but he has firmly rejected the demand for public testimony under oath.
Posted by Alex Constantine at Thursday, July 26, 2007