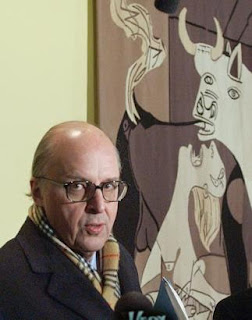 Failure by the US Congress to pass the Free Trade Agreements pending with Peru, Colombia and Panama would be a victory for Venezuelan President Hugo Chávez, said diplomat No. 2 at the US Department of State.

Deputy Secretary of State John Negroponte made the remarks when talking about international trade and foreign policy during a luncheon at the Business Council for International Understanding (BCIU) in Washington, D.C.

"A lot is at stake, including foreign policy substantial interests," said Negroponte about the agreements.

"To put it bluntly, defeating the Free Trade Agreements with Latin America would be a victory for Venezuela's Hugo Chávez."

"This is why we are making a great effort to persuade the Congress to support these agreements," he added.

Negroponte asked the business leaders who attended the luncheon to put pressure for the approval of the instruments," Reuters reported.
http://www.nndb.com/people/813/000044681/negroponte.jpg
Posted by Alex Constantine at Saturday, July 21, 2007