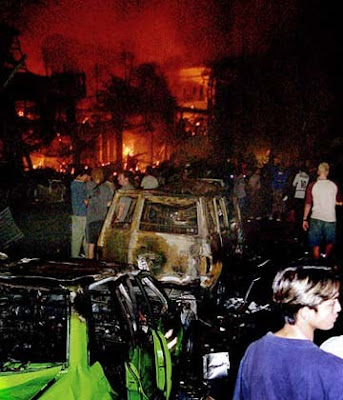 " ... The Bali bomb incident radically changed the Indonesian government's policies and attitudes towards Islamic inspired terrorism. Having previously denied the existence of terrorists operating on its own soil, Jakarta quickly realized that allowing the JI's activities to continue without impunity would hurt the nation's economic and foreign interests ... " - Jakarta Post, July 10, 2007

Government admits it knew of terrorist threat to Bali

By Owen Bowcott and Michael White, John Aglionby in Bali and David Fickling in Sydney
The Guardian
October 18, 2002

Thousands of British tourists and residents living in Indonesia were urged by the foreign secretary last night to consider leaving the country unless their presence was absolutely essential.

The announcement followed a day of political recrimination over the nature of the intelligence warnings received before the explosions on Bali. 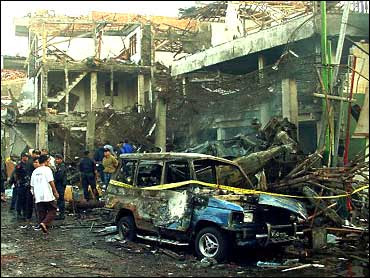 Downing Street officials who had earlier spoken of "no specific threat picked up in relation to Bali that weekend" modified it to the extent of confirming that a number of specific target areas had been identified, including six places in Indonesia, one of them Bali.

Following Australia's lead in advising its citizens to quit the predominantly Muslim state, Jack Straw warned there could be further terrorist attacks on western targets similar to the bombing of two nightclubs in Bali which killed at least 186 people last Saturday.

As many as 4,000 Britons are registered as residents with the embassy in Jakarta and thousands more are thought to be on holiday at any one time on the sprawling archipelago of islands which constitutes Indonesia.

The Foreign Office said that non-essential embassy staff and some dependents would be flown home shortly. 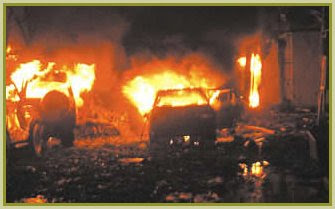 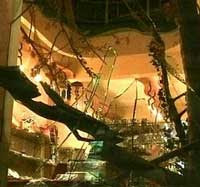 Officials were adamant, however, that it would be impossible to "act on every bit of static around the system that you happen to pick up" and that all such information - and travel warnings - had been placed on Foreign Office and US state department websites.

Mr Blair later admitted that if the authorities acted on every "generic threat ... essentially the terrorists would close down the world".

But he also conceded that "non-specific, broad-based" information about Indonesia had referred to six places or regions, ranging Bali to the larger neighbouring islands of Sumatra and Jakarta. 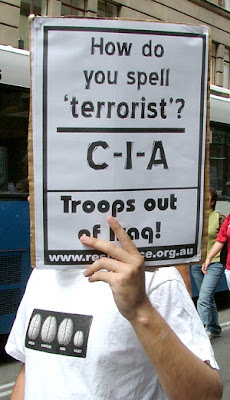 ABSTRACT - Many of educated elite in largely moderate Muslim country of Indonesia are blaming Central Intelligence Agency for Bali bombing that killed more that 180 people; reject United States suggestion that it was work of radical Islamic group with links to Al Qaeda; many Indonesians, especially moderate Muslim leaders, cannot accept idea that homegrown radical Islamic organization like Jemaah Islamiyah, headed by frail-loooking cleric Abu Bakar Bashir, could have had hand in terrorist act on its own soil; some Muslim leaders say it is not illogical to blame Washington for Bali violence, given history of US in Indonesia during cold war ...

There are indications, that in addition to its alleged links to Al Qaeda, Jemaah Islamiah also has links to Indonesia’s military intelligence, which in turn has links to the CIA and Australian intelligence.

The links between JI and Indonesia’s Intelligence Agency (BIN) are acknowledged by the International Crisis Group (ICG):

"This link [of JI to the BIN] needs to be explored more fully: it does not necessarily mean that military intelligence was working with JI, but it does raise a question about the extent to which it knew or could have found out more about JI than it has acknowledged." (International Crisis Group, http://www.crisisweb.org/projects/showreport.cfm?reportid=845 , 2003)

The ICG, however, fails to mention that Indonesia’s intelligence apparatus has for more than 30 years been controlled by the CIA.

In the wake of the October 2002 Bali bombing, a contradictory report emanating from Indonesia’s top brass, pointed to the involvement of both the head of Indonesian intelligence General A. M. Hendropriyono as well as the CIA:

"The agency and its director, Gen. A. M. Hendropriyono, are well regarded by the United States and other governments. But there are still senior intelligence officers here who believe that the C.I.A. was behind the bombing."

In response to these statements, the Bush Administration demanded that President Megawati Sukarnoputri, publicly refute the involvement of the U.S in the attacks. No official retraction was issued. Not only did President. Megawati remained silent on this matter, she also accused the US of being:

"a superpower that forced the rest of the world to go along with it… We see how ambition to conquer other nations has led to a situation where there is no more peace unless the whole world is complying with the will of the one with the power and strength."

Meanwhile, the Bush Administration, had used the Bali attacks to prop up its fear campaign:

"President Bush said Monday that he assumes al-Qaeda was responsible for the deadly bombing in Indonesia and that he is worried about fresh attacks on the United States."

The news [regarding the Bali attack] came as US intelligence officials warned that more attacks like the Indonesian bombing can be expected in the next few months, in Europe, the Far East or the US."

Moreover, shortly after the bombing, Australian Prime Minister John Howard "admitted that Australian authorities were warned about possible attacks in Bali but chose not to issue a warning." Also In the wake of the bombings, the Australian government chose to work with Indonesia’s Special Forces the Kopassus, in the so-called "war on terrorism".

Reminiscent of Operation Northwoods, the Bali attack served to trigger "a useful wave of indignation." They contributed to swaying Australian public opinion in favour of the US invasion of Iraq, while weakening the anti-war protest movement. In the wake of the Bali attack, the Australian government "officially" joined the US-led "war on terrorism." It has not only used the Bali bombings as a pretext to fully integrate the US-UK military axis, it has also adopted drastic police measures including "ethnic profiling" directed against its own citizens:

Prime Minister John Howard made the extraordinary declaration recently that he is prepared to make pre-emptive military strikes against terrorists in neighbouring Asian countries planning to attack Australia. Australian intelligence agencies also are very worried about the likelihood of an al-Qaeda attack using nuclear weapons. ...
Posted by Alex Constantine at Monday, July 30, 2007