Ward Churchill is an Indian activist promoted in his prime by Democracy Now's Amy Goodman. Many fellow Indians believe him to be a CIA/FBI plant in the movement. Churchill turned around and sued the University as soon as the dismissal was announced, but the provost's office has a solid case and it's doubtful that Churchill will be reinstated, IMHO. - AC 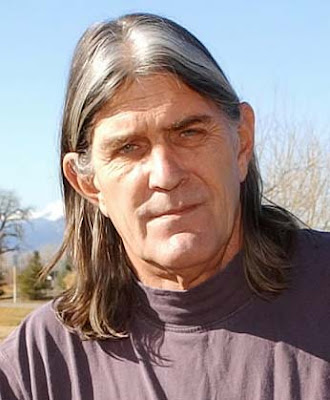 Ward Churchill: Some People Push Back - On the Justice of Roosting Chickens - A controversial American academic who likened Sept 11 victims to a leading Nazi has been sacked by his university.

After the hearing Ward Churchill insisted that he was 'going nowhere'
Ward Churchill had described those who died in the World Trade Centre attack as "a technocratic corps at the very heart of America's global financial empire", and as such a valid terrorist target.

He went on to call the victims "little Eichmanns", in reference to Adolf Eichmann, the SS leader who organised the Nazi concentration camps. He was hanged for crimes against humanity in 1962.

Mr Churchill's essay, Some People Push Back: On the Justice of Roosting Chickens, and his subsequent book, provoked a storm of protest across the US, and led to an investigation of alleged research misconduct.

He was fired yesterday after the University of Colorado's governing board found him guilty of plagiarism, falsification and other academic misconduct.

The charges did not relate to his controversial works on Sept 11, but the investigation only began after their publication and the subsequent national outrage.

Mr Churchill was found guilty of the allegations on an 8-1 vote.

"The individual did not express regret, did not apologise, did not indicate a willingness to refrain from this type of falsification in the future."

Mr Churchill's lawyer David Lane said that his client was being punished for his Sept 11 writings, and that the board's decision violated his right to free speech.

"It sends a message out to the academic community generally that if you stick your neck out and make politically inflammatory comments, you will be dragged through the mud for two years and you will ultimately have your tenure terminated," Mr Lane said.

Mr Churchill, who had previously vowed to sue if the board found against him, told reporters that he was "going nowhere".

He has defended his essay, saying that he did not intend the "little Eichmann" comparison to apply to children, blue-collar workers and passers-by who died in the World Trade Centre Attack.

The charges on which he was dismissed included misrepresenting the effects of federal laws on American Indians, fabricating evidence that the Army deliberately spread smallpox to Mandan Indians in 1837, and claiming the work of a Canadian environmental group as his own.