The Education of Neo-Nazi KEVIN STROM 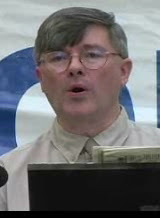 Kevin Alfred Strom was a very miserable child, it seems.

... Strom these days is known best as the guy who killed the National Alliance, bolting from the group he was a part of for years to form National Vanguard, and putting himself in the leadership position he wanted for himself for so long. His old lady Elisha Strom is always by his side - well maybe not always considering the rumors we hear about her - and the two have made quite the name for themselves in the WP scene. Much of them are bad names, but they don't seem to care. The two are just having the time of their lives as they chip away at the final vestiges of the neo-Nazi scene they are a part of.

Strom was born in 1956 and raised in a Lutheran household near Washington, DC. It was a broken home with a verbally abusive alcoholic father who hanged himself by the time Strom entered his 20s. As he entered high school, little Kevin was quite the anti-communist, a stance that a teacher who was a hardline right-winger took notice of. The teacher recruited him into the John Birch Society, and it was there that Kevin found members of the National Annoyance who turned him on to that organization as well. He had been attending regular Sunday evening meetings since 1975, but he did not officially join the NA until 1982. He was real tight with William Pierce who he spent the next few years laboring for, setting up the telephone and alarm systems of the NA compound when they moved in back in 1985. Pierce introduced Strom to Kristen Kaiser in 1987. Kaiser was married, but that didn't matter to Strom, although the following year, that marriage fell apart.

Strom and Kaiser were married by Pierce in 1990, and the couple had three kids. They were married for five years, and you know it must have been a hell of a time for Kaiser, because soon after the marriage fell apart, she was talking to the Southern Poverty Law Center about the experience!

Kevin Strom became public in the early 1990s doing the radio show for the National Annoyance. He also got a little bit of notoriety when in 1990, when Nelson Mandela visited Washington, DC he was arrested outside the South African Embassy for assaulting a police officer during a pro-apartheid rally. When they searched Strom, officers found detailed sketches of Techworld, a downtown office building that happened to be adjacent to the Washington Convention Center, where Mandela was scheduled to speak. Eventually the assault charge was dropped and the sketches were forgotten, but it is doubtful Strom had the balls to pull anything off. To give one an idea of how much of a punk ass he is, Strom quit abruptly in 1995 after the Oklahoma City bombing fearing that the FBI was going to raid the National Annoyance compound in West Virginia and that he would be arrested. Years later after a messy divorce from Kaiser, Strom returned again to work with NA and its founder William Pierce. Unlike any other staffer though, Kevin and his new wife Elisha chose not to live on the compound but in Stanardville, VA.

In 2002 it was off to the bowels of hell for William Pierce, and that caused tremendous turmoil for the NA. Many people speculated that Strom would be Pierce's successor but the board of directors chose Erich Gliebe to run the National Annoyance. Strom continued his radio work for the Annoyance along with running a NA news site, but Strom was bitter and pretty tired of being in everyone's shadow. He and Elisha decided to split off from the NA and form their organization National Vanguard. Of course this was after he and some other members were bounced out of the NA when they tried to mount a coup on Gliebe and Shaun Walker, the NA's current leaders. Strom took the name "National Vanguard" from the magazine he had edited for years for the NA. Meanwhile, no one else seemed to like Gliebe and Walker either, so several other units from the Annoyance followed left the group and followed Strom, leading to a bitter feud between both organizations. National Alliance is hardly an alliance of anything these days because of this.

Since becoming the leader of National Vanguard Kevin Strom has been a prominent speaker at National Vanguard events. The most notable are the Tampa Bay Summer Solstice festival in 2005 as well as the National Vanguard Conference in Elmwood Park, NJ on May 13, 2006, which brought out a number of well-known WP dirtbags like Paul Fromm of the Canadian Heritage Alliance and David Duke. Strom has strong ties not only with Duke and Don Black from Stormfront. In fact, Stormfront has become so much of a vehicle for National Vanguard that detractors have taken to calling it Stromfront!

Things have not been going as smooth as Strom would like them to be however. Since forming National Vanguard, several internal memos and applications have been leaked from his org that can be found at http://www.vanguardbod.blogspot.com. There has already been a split within National Vanguard, as Roger Williams and much of the Denver crew split to start up yet another group. He has also pissed off folks who are getting tired of using their stock footage and intellectual property to push some neo-Nazi message. On his website are golden age ads for Cadillac which were altered to promote white supremacy. According to the Southern Poverty Law Center, stock video from an Ocala, FL firm called Digital Juice which was used in a recent promotion for an Alabama TV station ended up being a part of an online ad for National Vanguard. Although Digital Juice deals in royalty-free professional animations, stock footage, music, layered graphics, clip art and templates, the NV ad is an apparent violation of its end user agreement, which says images may not be used in a "defamatory" or "scandalous" manner. The SPLC notes that Calgary, Alberta's iStockphoto was also a victim of this stupid routine by Strom. When The Truth at Last publisher Ed Fields bolted National Annoyance to join up with Strom, the announcement on the National Vanguard website featured a middle-aged man reading his anti-Semitic publication. In truth, it was an iStockphoto picture altered to insert the magazine, again a violation of the company's end user agreement requires that its images not be used in a "defamatory" way or to discuss "potentially sensitive" social issues.

Time will only tell with how long this group will last, but as long as they are around it will be fun to watch Kevin, Elisha and their assorted idiots bumble about.
Posted by Alex Constantine at Sunday, July 22, 2007