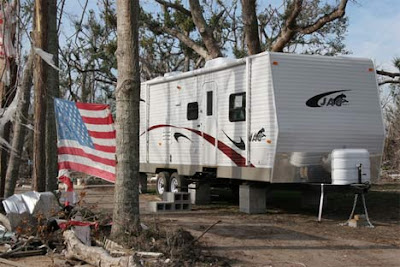 The Federal Emergency Management Agency has suppressed warnings from its own Gulf coast field workers since the middle of 2006 about suspected health problems that may be linked to elevated levels of formaldehyde gas released in FEMA-provided trailers, lawmakers said today.

At a hearing this morning of the House Oversight and Government Reform Committee, investigators released internal e-mails indicating that FEMA lawyers rejected environmental testing out of fear that the agency would then become legally liable if health problems emerged among as many as 120,000 families displaced by Hurricane Katrina who lived in trailers.

FEMA's Office of General Counsel "has advised that we do not do testing," because this "would imply FEMA's ownership of this issue," wrote a FEMA logistics specialist on June 16, 2006, three months after news reports surfaced about the possible effects of the invisible cancer-causing compound and one month after the agency was sued.

Another FEMA attorney on June 15 advised, "[d]o not initiate any testing until we give the OK. . . . Once you get results and should they indicate some problem, the clock is running on our duty to respond to them."

Nearly 5,000 pages of documents turned over to the committee "expose an official policy of premeditated ignorance," Waxman charged. "Senior officials in Washington didn't want to know what they already knew, because they didn't want the legal and moral responsibility to do what they knew had to be done."

"FEMA's reaction to the problem was deliberately stunted to bolster the agency's litigation position," Davis said. The documents "make it appear FEMA's primary concerns were legal liability and public relations, not human health and safety."

About 60,000 households affected by Katrina remain in trailers.

FEMA Director R. David Paulison, testifying after sitting through the four-hour hearing, apologized to Congress for withholding information and said "in hindsight" FEMA should have started testing trailers earlier.

"The health and safety of residents is my primary concern," Paulison said.
But he added that more research is needed to determine what is making people sick, and he spread responsibility to a half-dozen federal health, environmental and housing agencies and private manufacturers.

"There is an issue inside the trailers, but I don't know if it's formaldehyde or mold or bacteria" or something else," Paulison said, adding that he knew of no federal scientific consensus on what level of formaldehyde in homes is safe.

FEMA announced yesterday that it has asked CDC to help conduct a new public health assessment of trailers used for prolonged periods under real-life conditions.

"The health and safety of residents is FEMA's primary concern and FEMA believes additional research is needed to address recently raised inquiries and concerns," an agency press release stated.

As of May 2007, FEMA had received 140 formaldehyde complaints. Some Katrina trailer residents filed a class-action lawsuit in June in federal court in Baton Rouge against trailer manufacturers.

The Sierra Club in May 2006 reported finding unsafe levels of formaldehyde in 30 out of 32 trailers it tested along the Gulf Coast.

"The American Academy of Pediatrics remains deeply concerned that Gulf Coast children residing in FEMA trailers may have been and may continue to be exposed to levels of formaldehyde gas that are hazardous to both their short-term and long-term health," Dr. Scott Needle of the American Academy of Pediatrics said in testimony for the committee today.

The formaldehyde controversy, revived scrutiny of the disaster-response agency. Its sluggish response to Hurricane Katrina in August 2005 was chronicled in a series of government reports and led to a congressional overhaul earlier this year.

Today, Waxman and Davis charged that FEMA's apparent ongoing indifference to storm victims and resistance to investigators marked an infuriating pattern of bureaucratic self-protection that augurs poorly for the nation's emergency preparedness.

"The federal government's primary response agency has to be proactive, nimble, and trusted as the honest broker between Washington and those in need at the state and local levels," Davis said. "Reading these documents, I'm not persuaded FEMA is that agency yet."

Waxman said FEMA exists to serve the public, "but it acts as though protecting Director Paulison from embarrassment is more important."

In May, FEMA said its own tests of 96 new trailers near Baton Rouge last September and October found formaldehyde at 1.2 parts per million, but levels dropped to 0.3 parts per million after four days of ventilation. FEMA said that is the accepted threshold used by the Department of Housing and Urban Development for its manufactured homes.

But Mary C. DeVany, an occupational health and safety engineer advising the Sierra Club, testified that that exposure limit of 0.3 parts per million is 400 times greater than the normal limit for year-round exposure set by the CDC-affiliated Agency for Toxic Substances and Disease Register. It is also three times the daily exposure limit recommended by the National Institute on Occupational Safety and Health, she said.

"This misapplication and skewing of scientific results is at best unethical and grossly misrepresents and attempt to minimize the adverse health effects being experienced by thousands of travel trailer residents," DeVany said.
High levels of formaldehyde were still found in nearly all trailers sampled, whether continuously ventilated or air conditioned, DeVany said.

She called on FEMA to relocate without delay people living in trailers with levels above 0.05 parts per million and not to turn over any trailers for re-use without testing.

Formaldehyde is a common wood preservative used in construction materials such as particle board, plywood, glue, curtains, molded plastic and countertops.

The chemical can cause vision and respiratory problems. It has been linked to higher rates of asthma, bronchitis and allergies in children with long-term exposure.

In a letter to Rep. Gene Taylor (D-Miss.) that month, CDC Director Julie Louis Gerberding wrote that her agency recognized residents' symptoms but said the effects of formaldehyde "are likely to be transient."

At a congressional hearing earlier this year, Paulison said, "We've told people they can air those trailers out," guidance the agency has formally issued to trailer residents.

"You can't hang an industry on one case where they checked it," Souder said. "We have some individuals, we have 177 formaldehyde complaints out of 100,000? . . . A sweeping statement doesn't cut it, there needs to be actual checking and measurement."

Three trailer residents who testified before the panel described frequent nosebleeds, respiratory problems and mysterious mouth and nasal tumors that they or family members had suffered. They also said veterinarians and pediatricians had warned that their pets and children may be experiencing formaldehyde-related symptoms.

"What makes me so angry is that FEMA is providing trailers to disaster victims that they have 'inspected' and deemed safe without truly ensuring that they are," said Lindsay Huckabee, a mother of five from Pass Christian, Miss., who now lives in a trailer in nearby Kiln.

"We have lost a great deal through our dealings with FEMA, not the least of which is our faith in government," said Paul Stewart, a former Army officer in Mississippi.