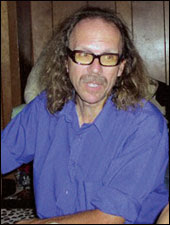 American neo-Nazi Craig Cobb, the first person to prominently post the home address of a federal judge whose husband and mother were later murdered there, has moved to Estonia to help build a European white supremacist movement.

"I hope to use my large house in Estonia to do White media, to network with White Nationalists throughout Europe and the United States, and especially to form an International Office of White Diaspora," Cobb, 55, wrote neo-Nazi webmaster Bill White late last year.

Craig Cobb acquired some notoriety in white supremacist circles when he posted the home address of a federal judge he didn't like to a website. Two years later, the judge's husband and mother were found murdered at that address.

He added that he wanted to work to bring U.S. and British whites to white-dominated European countries like Estonia and Russia.

Cobb, active for years in the World Church of the Creator, White Revolution and other U.S. neo-Nazi groups, also said that America was beyond help. "I believe that the Democrat[ic] and Republican criminal syndicates that run the U.S. with international jewry's [sic] criminal syndicate cannot now be stopped," he wrote. "Media barrages too much control the minds of White Americans."

Last November, the Estonian newspaper Eesti Ekspress interviewed Cobb and reported that he had bought a house and piece of land some 30 miles outside the capital city of Tallinn. The paper said Cobb was working to find like-minded people and quoted him identifying Raigo Solg as the leader of Estonian neo-Nazis. Solg is a former Ministry of Justice official who now hosts radical radio programs.

Cobb has been associated with many of America's leading extremist groups. In recent years, he worked with members of the neo-Nazi National Alliance, living near the group's West Virginia headquarters in 2003. He distributed issues of The Aryan Alternative, a racist tabloid published in Missouri. He handed out copies of a racist CD music sampler as part of "Operation Schoolyard." And in 2005, he worked with Todd Vanbiber, a former Alliance member who served time after the bomb he was building to attack the approaches to Disney World in 1997 blew up in his face.

Perhaps most infamously, Cobb publicized the home address of U.S. District Court Judge Joan Lefkow in Chicago. Lefkow had ruled against the World Church of the Creator in a civil lawsuit, and Cobb was infuriated. In 2003, Cobb took the address from a minor neo-Nazi site and reposted it to Stormfront, a huge racist forum. Lefkow's husband and mother were murdered at that address in February 2005, but the killer was later found to be unconnected to racist groups.