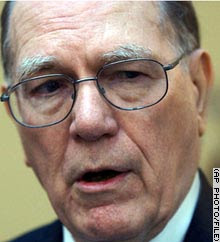 It was my own experience, as a late 1960s anti-war, pro-civil rights activist who came through a complicated maze to align with the then-socialist designs of one Lyn Marcus, a.k.a. Lyndon LaRouche, that informed my exclusive journalistic exposé this April. I broke the news of the link between the suicide of a long-time LaRouche associate and a published diatribe from LaRouche headquarters the same day contending that the only good his group’s used-up “baby boomers” could do was kill themselves.

My article in the April 19, 2007 edition of the Falls Church News-Press entitled, “Rt. 28 Suicide Jumper Was Long-Time Associate of LaRouche,” noted the coincidence of the suicide of Ken Kronberg, 58, in Loudoun County, Virginia, on April 11 and the LaRouche group’s internal so-called “morning briefing” issued earlier that day which assailed Kronberg's work for LaRouche.

The document, authoritative among members of LaRouche’s group, lashed out at the failures of the “baby boom” generation, including among its own members, and singled out “the print shop” headed by Kronberg as “among the worst.” It stated, speaking to young recruits, “the Boomers will be scared into becoming human, because you’re the real world, and they’re not. Unless they want to commit suicide.”

My exposé caused a huge reaction among legions worldwide whose lives have been damaged by LaRouche and his tiny, cult-like organization. They include those who support the crusade of a London-based mother of one Jeremiah Duggan, a young LaRouche-influenced student who wound up dying under suspicious circumstances in Germany four years ago.

When I got involved with LaRouche in the early 1970s, it was a different world. The power of the anti-war and civil rights movements, propelled even more forcefully by reaction to the assassinations of Martin Luther King and Robert Kennedy, created a thirst and hope for a profound shift in society’s fundamental values.

As a seminarian in Berkely, California who drove to classes many days past long lines of National Guard, who tasted tear gas at anti-war marches, becoming part of this movement was like a religious calling.

Steeped in the speeches of King and the seething ferment of the Bay Area, having taken leading roles in the fledgling gay and women’s liberation causes, I worked for the election of George McGovern in 1972. But in the wake of the Nixon landslide, and estranged from my family because of my radicalism, I took a hard turn to the left, abandoning the theories of Hannah Arendt for Rosa Luxemburg.

So I got involved with LaRouche, despite warnings from some, like Rep. Fortney Stark, who told me personally that LaRouche “was CIA.” Others, like the late right-wing Georgia Rep. Larry McDonald, insisted LaRouche “was KGB.”

However, I and others who aligned with LaRouche in that period, like Kronberg, were generally well-meaning young people determined to follow through on their zeal to end the Vietnam War by bringing social and economic justice to the world. In that era, being a socialist, advocating the creation and re-distribution of wealth, was considered a meritorious vocation. Besides, standing for what you believed, against social convention and its often angry reaction to you, steeled one’s character.

Maybe it was always bad, but by the late 1970’s, LaRouche’s movement had turned decidedly ugly, into something existing only for the purposes of LaRouche’s own aggrandizement and the twisted agendas of too many sinister forces that seemed to influence him. As undernourished members “deployed” for 16 hours a day raising money, and were forced to have, collectively, hundreds of abortions to save their energies for serving him, LaRouche built up his ego, bully-lust, and palatial estate.

But I was reluctant to admit my efforts were for naught, and mistakenly feared the consequences of abandoning my convictions. Still, I began a measured, phased exit in that era, the way a lot of former members left, completed in the ‘80’s. To this day there are some I once felt were good people who remain trapped, psychologically, by LaRouche. Neither they, nor I, were “right wing” or “anti-Semitic” as many, perhaps rightly, now consider LaRouche and his movement.

But just as LaRouche told us in 1973 our parents were society’s problem, he’s now telling a new generation that their parents, and all baby boomers, even those who brought their heartfelt passions for justice and peace to associate with him, are society’s bane.
http://www.fcnp.com/index.php?option=com_content&task=view&id=1473&Itemid=35
Posted by Alex Constantine at Friday, July 20, 2007