" ... Gilmour was leading a globally-important military operation in the Middle East at the time he was exposing himself and downloading child pornography. ... "

Gilmour's explanation: "NAVY PERV WALKS FREE," Daily Record, 28 July 2007 - " ... Gilmour blamed the offences on the stress of serving in Iraq and being far from his family. ... "
http://www.dailyrecord.co.uk/news/news/tm_headline=navy-perv-walks-free&method=full&objectid=19533922&siteid=66633-name_page.html 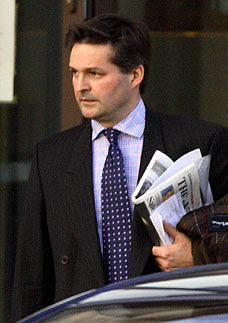 A former Royal Navy commander has been given a two-year supervision order after flashing at young girls and downloading pictures of child pornography.

Craig Gilmour, 39, who was formerly captain of the fishery patrol vessel HMS Tyne, drove up to young girls and exposed himself to them in Portsmouth, Hampshire.

The father-of-three, who resigned from the Navy after the allegations were made, admitted four charges of indecent exposure as well as 19 charges of making indecent images and a further charge of possessing 359 indecent images of underage girls at earlier hearings.

Gilmour was cleared by a jury at Portsmouth Crown Court last month of inciting the 10-year-old to perform a sex act on him.

Judge Gareth Cowling today gave Gilmour a community penalty order. He said there would be a two-year period of supervision attached to the order as well as a requirement to attend the Edinburgh sex offenders' programme for two years.

Gilmour was also told he will be registered on the sex offenders' register for five years.

He warned Gilmour: "If you do not do what is required of you, you will have to be brought back to court and if necessary (the court will) revoke that sentence and re-sentence you."

Mr Cowling added: "You are a man full of remorse. Whilst it is difficult of course for anybody else to understand why you or indeed anybody else commits this type of offence, I suspect you yourself have difficulty in understanding how you came to commit these offences."

He added: "The protection of the orders I make are far greater, far longer lasting than any short-term custodial sentence."

He told Gilmour his "abhorrent behaviour" was aggravated by the young age of his victims.

Gilmour was leading a globally-important military operation in the Middle East at the time he was exposing himself and downloading child pornography.

Between 2005 and last year, Gilmour was the Navy's chief of staff for Task Force 58, a multi-national coalition force which conducted maritime security operations in the North Arabian Gulf.

Serving as right-hand man to Task Force Commander Commodore Bruce Williams, Gilmour was responsible for the day-to-day running of the operational set-up as part of Operation Telic, to protect Iraq's oilfields as well as legitimate maritime traffic in the region.

In a letter to the court, Commodore Williams described Gilmour as an "ambitious" and "capable" officer with a "highly developed sense of duty" who had a role with considerable responsibility for the Task Force.

But the pressure of his role in the Gulf caused Gilmour, who has since been receiving psychiatric treatment, to suffer a breakdown.

His high responsibility work kept him out of the country for 11 months during a 14-month period and he worked in Portsmouth 300 miles away from his family in Newcastle.

Gilmour, whose wife is seeking a divorce and refuses to let him see their children, is now living with relatives in Edinburgh.

He said during the trial: "When I got back from the Gulf, I was aware I was a very absent father to my children.

"I was under a great deal of pressure to make sure when I was back I would be the best father I could be and I was aware I wasn't coming up to that mark.

"I was annoyed at myself and disappointed. It is quite clear that the absence I was having from my family, I was filling in an unhealthy way."

The trial last month heard how Gilmour pulled over in his blue Jaguar car, opened the passenger window and asked his 10-year-old victim for directions as she walked along Wordsworth Road, Paulsgrove.

In a videoed interview with police the victim said she felt "quite shaky and nervous" after he lifted his shorts to reveal his penis.

The 19 counts of making indecent images of children relate to photos downloaded on to his computer at his family home in Turbinia Gardens, Newcastle-upon-Tyne.

The 359 indecent images found on his computer at his base, Whale Island, Portsmouth, were of naked girls aged between 10 and 14 but did not involve any sexual activity.

In a separate court case earlier this year, Gilmour was fined £600 at Portsmouth Magistrates' Court after pleading guilty to inappropriate behaviour by using "vile" words towards two 13-year-old girls.

In similar circumstances to those described in his trial for indecent exposure, the court heard that Gilmour pulled his car over close to the two teenage girls in Portchester. He asked them directions before making lewd comments to them on October 23 last year.

District Judge Philip Gillibrand fined Gilmour £600 and ordered him to pay £55 prosecution costs. He told Gilmour it was a "vile offence which cannot be tolerated".

She said he was "well liked, well respected, relied upon" and added: "His career would have gone from strength to strength.

"He has been forced to resign so that career is now behind him. His wife seeks a divorce. She has recently indicated she will not speak to him. He has not seen his children since last year. She has refused to allow him contact."

She said that his behaviour has had "huge and far reaching consequences beyond anything he would have contemplated at the time."