Mission: Implausible - The CIA is Distancing Itself from Van Pao Coup Plot 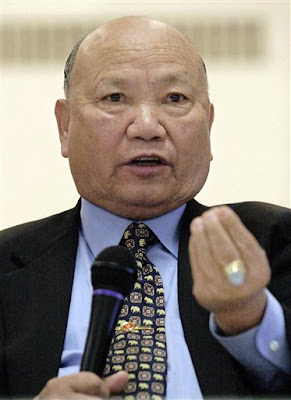 Mission: Implausible - The CIA has disavowed any knowledge of the alleged plot against Laos by Vang Pao and others. At least one defense attorney doesn’t buy it.

After spending a month behind bars, Vang Pao, the former leader of the CIA’s Secret Army in Laos, is a free man—for now.

A federal judge last Thursday ordered that Vang, 77, be released on bail pending trial on charges that he and 10 other defendants tried to overthrow the Lao People’s Democratic Republic. The government claims Vang and the other coup plotters attempted to purchase machine guns, explosives and Stinger missiles and smuggle them (along with hundreds of mercenaries) into Laos to help Hmong rebels based in the jungle overthrow the Communist regime in Vientiane.

In seeking their clients’ release on bail, attorneys for the defendants argued that the men pose no danger to society. It probably helped their case that Vang attended the hearing in a wheelchair, and two other alleged coup plotters, Chong Yang Thao and Seng Vue, had to be hospitalized that day for stroke complications.

But the defendants’ health wasn’t the only topic of interest in the courtroom. Defense attorneys also had a few things to say about Vang’s former employer in Laos, the CIA. In a 12-page brief filed on July 11 by lawyers for all 11 coup plotters, defense attorneys not only contested the government’s claim that the defendants should remain behind bars, but also argued against the government’s effort to prevent them from questioning an undercover agent for the U.S. Bureau of Alcohol, Tobacco & Firearms known to the alleged plotters as an ex-U.S. Navy SEAL named “Steve.”

A 64-page attachment to that brief, also filed in court July 11, includes lengthy excerpts of tape-recorded conversations between alleged coup plotter Harrison Jack, a former U.S. Army Ranger who fought in Vietnam, and “Steve,” who posed as a gun dealer willing to help Jack obtain weapons and mercenaries for the attempted coup. According to the defense brief, “evidence” from those telephone conversations “indicates the defendants thought their activities were authorized by the CIA.”

The Weekly obtained a copy of both documents. The transcripts of the conversations between Jack and “Steve”—both telephone calls and in-person meetings—include dozens of references to the “CIA” and the “Agency” as being aware of the plot. For example, in an April 3 telephone call, Jack, according to the transcript, told the informant that the alleged plotters had already held at least one meeting with CIA officials. “Apparently that was a fairly positive discussion. . . . They were meeting with a deputy director,” Jack said. “But what they offered was . . . well, their comments were something along the lines, you can’t count on the [United Nations], the process is too slow, you need to take care and protect yourself in the field and we’ll support you in that.”

“You know what they mean by ‘we’ll support you in that’?” asked “Steve,” the ATF agent.

On April 12, when Jack and “Steve” met in person to discuss obtaining weapons, Jack told the agent that the CIA had recently endorsed the plot. “We can’t become overly involved,” Jack claimed the agency had told the plotters. “We’ll support and facilitate whatever else you got going on, to include funding.” Less than a week later, Jack updated the agent again, saying the alleged plotters had raised money from Rolling Thunder, a group of Harley-Davidson-riding Vietnam veterans, with the promise that the mission to overthrow the Laotian government would also liberate American prisoners of war, whom Jack believed were still languishing in secret prisons.

“Money will not be an issue,” Jack claimed. “The CIA has offered to contribute. . . . I’ve mentioned that before.” Later, on May 4, Jack told the agent that the CIA was “standing by and ready to roll.”

Although most of the references to the CIA were statements made by Jack to the ATF informant, the transcripts of those conversations show that as early as March 7, “Steve” told Jack that he believed the U.S. government would support the Laotian coup if the alleged plotters succeeded. “Well, the U.S. has no choice but to support a democratic government,” the agent said. “They will support it. . . . There’s no doubt in my mind. They need a stronghold in that area.”

Through its general counsel, the CIA has already filed a sworn affidavit against Vang, Jack and the other alleged coup plotters swearing the agency had no knowledge of the plot. John Balazs, Vang’s attorney, did not respond to interview requests from the Weekly.

But Mark Reichel, an attorney for alleged coup plotter Lo Cha Thao, says he firmly believes the CIA was aware of the plot. “The government says there’s no CIA connection,” Reichel says. “But the CIA isn’t going to tell the U.S. Attorney’s office in Sacramento that they were involved. . . . They are probably shredding documents left and right, but we’re going to pursue every possible aspect to get to the truth.”
Posted by Alex Constantine at Friday, July 20, 2007